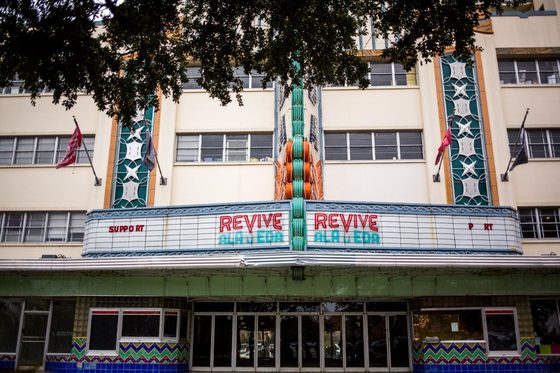 From The Rivard Report: The iconic Alameda Theater hasn’t hosted large crowds for Spanish-language films and performers in decades, but the storied Latino performing arts venue which now sits in disrepair may soon get the facelift it desperately needs – and with it a chance of revival.

The City of San Antonio and Bexar County are finalizing an agreement with Texas Public Radio (TPR) that will allow the nonprofit to move its headquarters from its longtime offices on Datapoint Drive near the Medical Center into the space behind the Alameda Theater, located at 318 W. Houston St., and will include investments from both entities to help renovate the historic structure.

Details of the investments and agreement are still being fleshed out and remain confidential, Councilman Roberto Treviño (D1) told the Rivard Report last week. Officials could not confirm the amount of potential investment from the City and County or disclose how those funds would be distributed in the process, but participants in the talks say both the City and County have discussed multimillion contributions to bring TPR downtown and reactivate the Alameda. Assistant City Manager Lori Houston stated in an email Friday that she expects the agreement to be completed by early February, and “if the project is deemed feasible, additional community dialogue and stakeholder meetings will occur before City Council and Bexar County Commissioners Court consideration.”

The City, the County – particularly Judge Nelson Wolff and Commissioner Paul Elizondo (Pct. 2) – and TPR all are aiming for a partnership that allows TPR to coexist with the Alameda, Treviño said, and places a key focus on reactivating and rehabilitating the iconic theater.

“What I think we’re getting is a real partnership without giving away an important cultural asset like the Alameda,” he said. The Alameda opened in 1949 as the country’s largest movie venue dedicated to Spanish-language film and performing arts. Over the years, the vibrant theater hosted some of the biggest Mexican names in the arts, from composer and singer Agustín Lara to film star Pedro Infante to singer and actress María Félix to comedian Cantinflas.

The theater that once was a cornerstone of Mexican culture now sits empty after decades of neglect, its black-light murals portraying the story of Texas Anglos and Mexicans collecting dust and its seating area gutted. The Alameda opened in 1949 as the country’s largest movie venue dedicated to Spanish-language film and performing arts. Over the years, the vibrant theater hosted some of the biggest Mexican names in the arts, from composer and singer Agustín Lara to film star Pedro Infante to singer and actress María Félix to comedian Cantinflas.

The theater that once was a cornerstone of Mexican culture now sits empty after decades of neglect, its black-light murals portraying the story of Texas Anglos and Mexicans collecting dust and its seating area gutted. In 2000, the Alameda’s façade was restored. It still features its large and colorful 86-ft. marquee, one of the only remnants of the institution’s better days as the main attraction in San Antonio’s “Little Mexico.”

Officials and longtime community members, many of whom have fond memories of attending various performances and cultural showcases at the Alameda, hope that a strategic partnership will help restore the theater to its former glory – both structurally and in terms of programming – for older and newer generations of San Antonians to enjoy.

“One of our tenets of our mission statement is preserving culture, so we kind of raised our hand and said, ‘Yes, we’d like to see something happen with the Alameda and we have no objections with TPR, but we need to preserve the theater,‘” said Pete Cortez, CEO of La Familia Cortez Restaurants, the civically engaged owners and operators of Mi Tierra Café y Panadería and three other local restaurants, who have been instrumental in the Alameda’s preservation over the years.

With that input came subsequent work and planning, which “has helped us better define exactly what’s at stake here,” Treviño said. Since then, project stakeholders have been creating a plan that emphasizes the Alameda’s preservation.

“We need to figure out the best way to do that,” Pete said, while working with TPR.

As part of the potential partnership with TPR, “the theater would be managed and programmed by a separate and new nonprofit conservancy,” Houston said. How exactly TPR would occupy the space is still being discussed, Treviño explained, but the organization would not be located within the actual theater that once sat up to 2,500 audience members, and instead would be in the area behind the stage. That area currently sits empty, but plans to convert it into office space are in place.

Partners are working on creating an “architectural and organizational design” to outline design aesthetics and a management plan for the facility, Treviño said. The Henry Ford Academy: Alameda School for Art & Design, which is based at the theater, would remain there, he added.

Perhaps one of the only provisions that’s not up for debate is maintaining the Alameda’s mission of celebrating the art and varying talents of the Latino community, and educating the younger generation on the subject.

TPR President and CEO Joyce Slocum officially announced the organization was eyeing the vacant Alameda Theater for relocation in May 2016. She recognizes that this cultural institution is special to thousands of San Antonians, which is why talks with the City and the County about moving into the space have taken time.

“It’s a complicated situation because there are lots of parties involved,” she said. “The Alameda is a very, very important representation of our city’s culture and history and needs to be treated with great care.”

Slocum sees the theater as an ideal location to house TPR’s growing staff and to make the nonprofit “more visible to our community.” “We don’t have a lot of foot traffic out here in the Medical Center on the eighth floor of an office building,” she said. “We’d like to have a space that allows us to be more of a convener of important conversations in our community and we think the Alameda can lend itself to that.”

TPR inhabiting the Alameda Theater’s future backstage office spaces would help the City and County achieve their goals of placing a viable organization in the building and enhancing the structure that is in the center of a growing and changing downtown.

“(It’s) an opportunity to expand the programming and the functionality of the (Alameda) Theater and leverages the new technology and media opportunities with TPR,” Houston said.

Bexar County is the main funder of the $175 million San Pedro Creek Improvements Project, which will transform the two-mile concrete flood control system into a linear park with cultural and historical amenities, and thus has a vested interest in the Alameda’s future and how it relates to the adjacent, evolving creekway.

“Our intent is to bring together the diversity, culture, and history of this theater as a venue for the community,” County Manager David Smith said. If TPR moves into the Alameda, major improvements – which could add up to several million dollars – will need to be made to the more than 60-year-old building.

La Familia Cortez has already made a significant contribution to the process by hiring an architect who specializes in the restoration of old theaters, as well as former president of the John F. Kennedy Center for the Performing Arts Michael Kaiser as an organizational consultant.

A budget for the overall project will be included in the City and County’s final contract draft, Houston said.

Breathing new life into the Alameda Theater would mean reinvigorating the lifeless, western part of Houston Street. Other nearby projects such as the proposed 23-story Frost Bank tower across the street and the San Pedro Creek Improvements Project bring more promise for pedestrian traffic and commerce in the area. An activated Alameda Theater amid new developments would draw visitors into the building where they can learn about its history and experience its magic for themselves, said Michael Cortez, who spearheads Mi Tierra’s public relations and marketing efforts and serves on the San Pedro Creek Improvements Project subcommittee.

“The Alameda Theater plays an important part not only in the Zona Cultural, but also with the San Pedro Creek,” he said. When it’s revived, “it’s just going to add more to the richness that the city is going to have.”

All parties involved see abundant opportunity for both TPR and the Alameda in the potential partnership. TPR hopes to host events and live broadcasts in the space and publicize the theater’s programming to its listeners.

The space is large enough for more organizations to office there, in the adjacent four-story Casa de Mexico International Building.

“The space is more than what TPR needs on its own. It’s not like we are precluding someone else from involvement with the space,” Slocum said. “The other thing is that we can give a lot of visibility to whatever activities are going on in that space. We have hundreds of thousands of listeners and if we are working cooperatively with whoever else might be in the space with us, I think that provides a benefit to them.”

Though TPR’s mission – “to engage in the production and distribution of non-commercial informational, educational, cultural, and entertainment content for the people of Texas” – is not necessarily devoted to the Latino community like the Alameda’s, Pete said he still sees the nonprofit as a good fit for the space.

Jorge Cortez, Pete’s father, can still tell dozens of stories about visiting the Alameda as a young boy with his grandmother and siblings. His detailed descriptions make it seem as though it was just yesterday that he marveled wide-eyed at the various Latino singers, actors, comedians, and musicians on stage, all instilling in him a sense of cultural pride that would never leave.

For years he has envisioned recreating that scene for his children and grandchildren. Now could be the right time to fulfill that dream.

“En nuestra gente, there’s so much talent. We need to do this … Tenemos que hacer algo bien,” he said. “Y parece que por fin todas las estrellas estan alineandose – and it seems that, finally, all of the stars are aligning.” 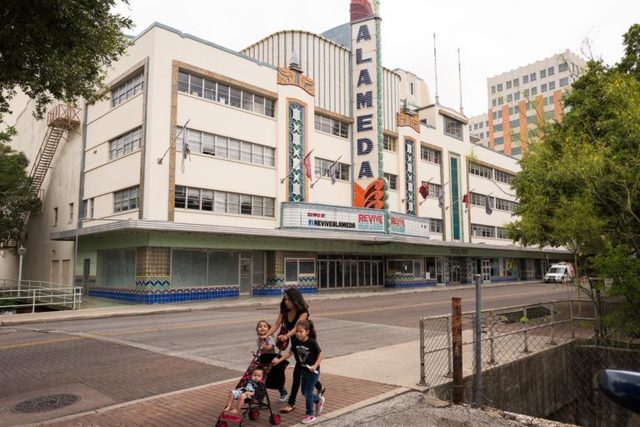 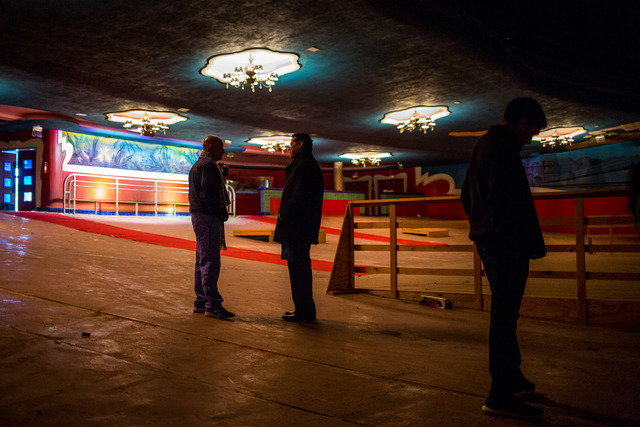 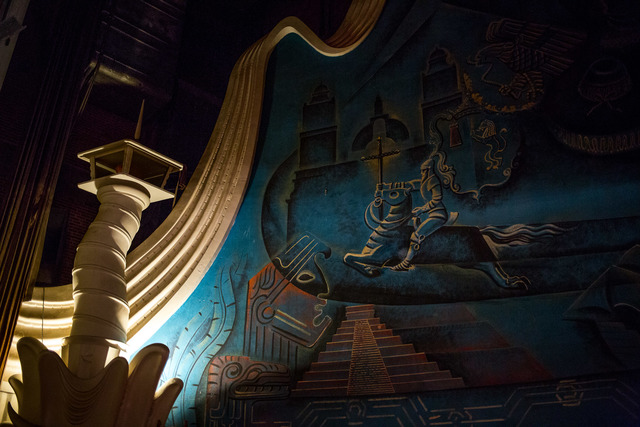