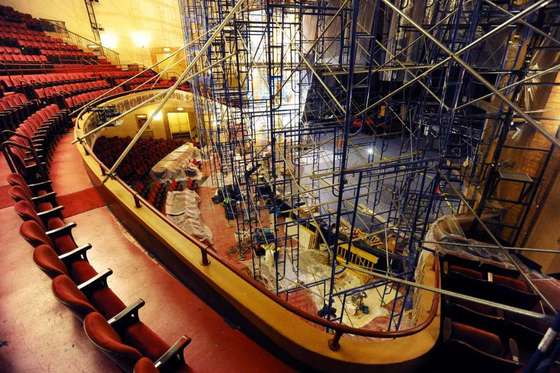 From the Stamford Advocate: Rather than settling in to a front-row seat, Randy Thomas found a perch in the mezzanine to catch the show going on at the Palace Theatre earlier this week. As he looked out across the expanse to a wooden platform more than 50 feet above the stage, he watched as workers in hard hats and safety vests moved carefully to restore and replace plaster where ceiling meets walls. Drills whirred, buckets were lowered and the work continued apace. “There is some really intricate work up there,” said Thomas, the theater’s director of production and facilities since 2006. He’s not as old as the plaster – which went up when the theater was built 90 years ago – but he’s been working here since 1991. “They don’t build them like this anymore. It would be way too expensive.” The Palace opened its doors on Atlantic Street on June 2, 1927. Designed by Thomas Lamb, a leader in his fieldwhose works include the Palace Theater in Waterbury, the performance venue rose from the wreckage of the Grand Opera House following a devastating fire in 1904. The site was purchased in the mid-1920s by Stamford residents Mary C. Vuono and her husband Charles and in its early days featured vaudeville acts. It then became a movie house, and, later, a stage for repertory work by the Hartman Theater company. Most recently, it has been host to musicians, comedians, dancers and other live acts on tour.

By week’s end, the Harman Stage will be cleared of equipment and materials, as well as the steel scaffolding that stretched from one end of the proscenium to another. The crew began the work in mid-December. “We do have a show on Saturday, and the show must go on,” Thomas said, referring to the Stamford Symphony Orchestra, which is presenting the Emerson String Quartet at 8 p.m. There is plenty of upkeep needed for a theater of a certain age, Thomas said, but this latest project has been on his radar for some time. A leaky roof — since replaced — damaged some of the plaster. The preservation work will make the span safer, reveal sections destined for a scrubbing and touch-up and replace areas where needed. Decorative ceiling accents also are getting a fresh coat of paint that keeps with the theater’s original colors. The nonprofit Stamford Center for the Arts, which operates the Palace, received about $140,000 from the city for the project as part of its capital budget. EverGreene Architectural Arts, an ornamental plaster restoration and decorative work company, was hired for the project. It’s a company that knows the Palace well, having worked on other parts of the venue in the past. “We take a very careful look at what is damaged and what is truly missing,” said project manager Toland Grinnell, from the firm’s New York City office. “Sometimes it is not that obvious. The plaster may not look loose or cracked at a great distance. But when you do this all day long, you start to notice.” The specialists have made rubber molds and created new sections on site, in addition to some early forms made at the firm’s New York plaster shop. EverGreene will save as much of the historic plaster as possible. “This is part of our American heritage and we want to preserve,” Grinnell said. “It’s one of the aspects that makes our work rewarding … the crews are really carrying on a tradition in America that goes back more than 100 years.” There are many items on Thomas’ wish list, but it is a matter of having the time and funds. Thomas, who grew up in Stamford, recalled seeing “The Exorcist” at the theater in 1974 and, later, he worked behind the scenes for the Hartman Theater company. “There is many a star that has crossed this stage,” he said, recalling performances by Henry Fonda, Jan Miner, Margot Tenney and Edward Herrmann that he saw when he was younger. “Trying to keep this place alive and the arts alive is huge.” 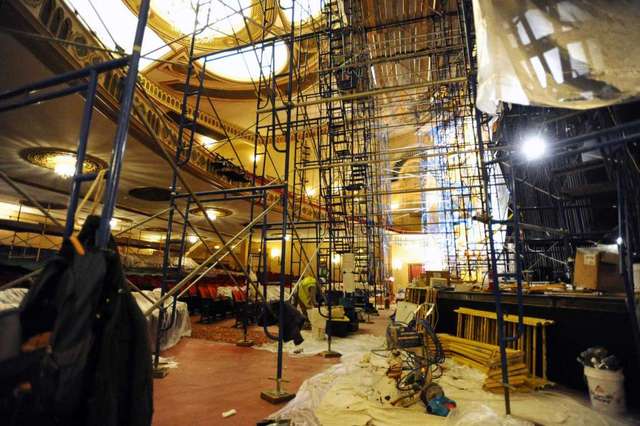 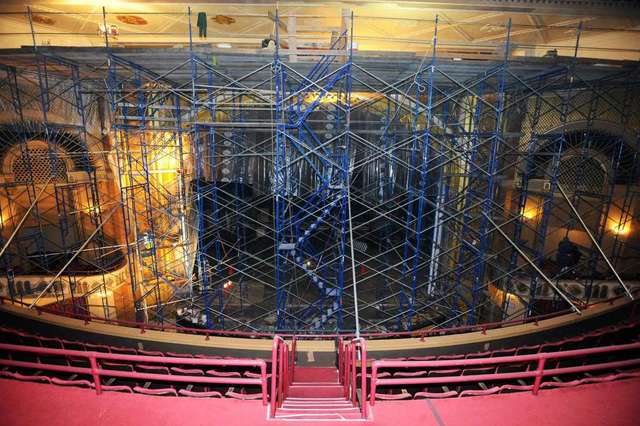