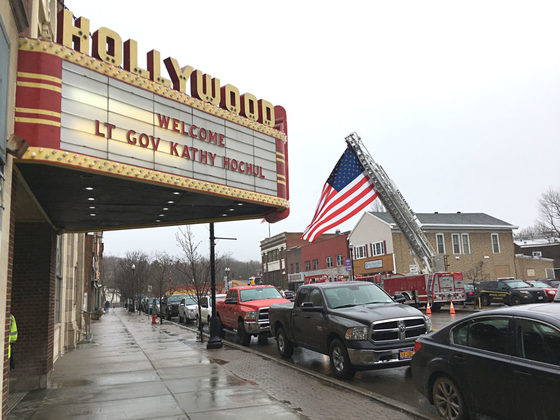 From the Observer: Lt. Governor Kathy Hochul recited Gov. Andrew Cuomo’s State of the State address in Gowanda’s Historic Hollywood Theater. However, the normal address ended with a surprising twist.

Hochul added that the Hollywood Theater will receive $324,000 to be applied toward the seating, lighting, carpentry and other items. The news was a part of the Restore New York Communities Initiative.

A total of 75 projects were awarded in all of New York, with three within the local area.

“We’re just ecstatic about it,” Hollywood Theater Board President Mark Burr said after hearing the news.

The additional funds bring the restoration within around $650,000.

“By preserving the cultural legacy and historical character of our downtowns, Gov. Cuomo is breathing new life into old institutions and laying the foundation for future economic success and opportunity,” Hochul said.

The village of Gowanda united as Hochul came to town.

A large U.S. flag took flight above West Main Street and the $324,000 funding only added to the mood.

“We have successfully secured funding for the Hollywood Theater because it is a historic structure that is synonymous with Gowanda,” state Sen. Cathy Young, R-Olean, said in a news release. “Great progress has been made in restoring the iconic features of the original theater, and this additional funding will go a long way toward its re-opening. When fully restored, the theater will be an attraction for heritage tourism, and generate economic activity for the surrounding businesses.” 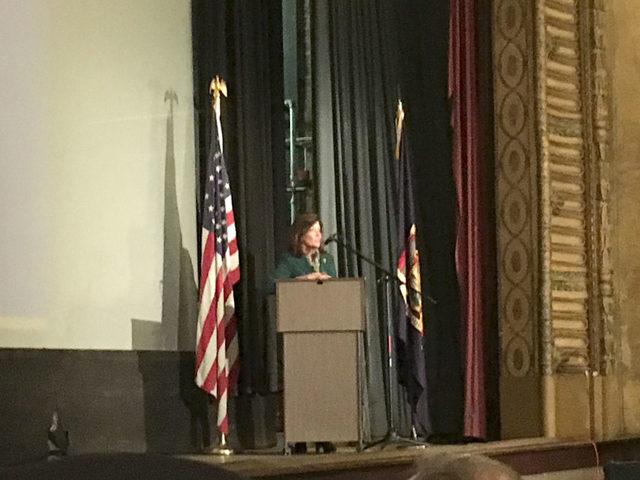