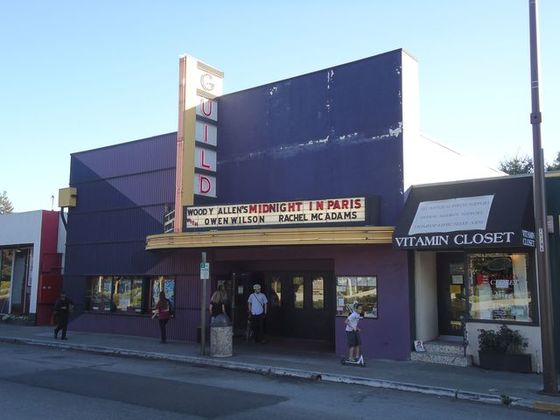 From The San Francisco Chronicle: Twice on Saturdays and twice on Sundays, Judy Adams walks from her Menlo Park home to the Guild Theatre on El Camino Real and back. She’s there when customers go into the old-time picture show and she’s there when they come out, but she doesn’t stay for the movie.

Adams’ job, self-appointed and singularly motivated, is to get signatures for a petition to save the Guild, a single-screen cinema opened in 1926. It’s a heroic gesture considering that there is no indication the Guild is closing. But Landmark Theatres, which operates the Guild, is on a month-to-month lease, and the building may be for sale.

Adams knows how this story ends, so she is taking “preemptive action,” she says, while standing in the cold of a January day last week before the 5 p.m. screening of “Manchester by the Sea.”

“The goal is to get the city, Landmark Theatres and the owner talking about a way to keep a neighborhood theater and get it upgraded while keeping the charm of a small art house,” Adams says.

If the Guild goes, so goes a long tradition of stand-alone movie theaters along the El Camino, the main commercial strip that connects all of the commuter towns that rose up alongside the tracks of the Southern Pacific line.

Driving south from the county line, you could mark the cities by their movie theater marquees. There was the El Camino in San Bruno, the Millbrae, the Hillsdale in San Mateo, the Belmont, and the Park and the Guild in Menlo Park.

Branching off El Camino were the Fox in Burlingame; the San Mateo, the Manor and the Palm, all in San Mateo; the Carlos, the Tivoli and the Laurel, all in San Carlos; and the Fox in Redwood City.

Now the giant Millbrae marquee proudly guards a vacant video store, with Comerica Bank at one end. The Fox in Burlingame is Fox Mall. The Hillsdale is a furniture store.

The Belmont, which still has a blade so tall you can see it from San Mateo, has been repurposed as a Planet Granite with a climbing wall replacing the big screen. The Laurel is a condo complex with a real estate sales office on the ground floor. The Carlos, once the anchor of San Carlos Avenue, has been replaced by a government building housing SamTrans. The Fox marquee still shines over a live performance venue in downtown Redwood City.

The Park, which once announced your entry to Menlo Park headed south, is now a vacant lot with grass growing on it and a cyclone fence around it. The Park was scrapped and sold by Howard Crittenden of Atherton, who also owns the Guild.

A year ago, the Almanac, a mid-Peninsula weekly, reported that Crittenden had listed the building for sale or “redevelopment on a long-term lease.”

Reached by telephone, Crittenden had no comment on whether the Guild is for sale. He is aware of Adams’ petition. “I think it is great,” he says. “I think we should save the theater.”

Crittenden also says the month-to-month lease at the Guild is at Landmark’s request and that he “would love a long-term lease.”

Laine Kaplowitz, director of publicity for Landmark Theatres in Los Angeles, would not comment on the Guild’s lease situation and says it is “business as usual. We have no intention of closing the theater.”

The only indication that the Guild is at risk is Adams, 71, standing there in a magenta-colored jacket to blend in with the facade, and a black apron with pockets for her flyers.

Retired after selling a software company, she is polite and unobtrusive. She always tells the clerk at the ticket window that she is there, and approaches people after, never before, they have bought their movie tickets.

“I lurk,” she says, and once she has their attention, she talks up the history of the Guild, a cozy 300-seat box.

According to the Menlo Park Historical Association, the Guild was first called the Menlo and was the first movie theater on the Peninsula. It once had a spacious lobby, but 30 feet were reclaimed to widen the roadway.

This leaves about five steps from the sidewalk to the seating. The Guild could use some refurbishing, but its devotees love it.

“It’s a beautiful design with the Art Deco, and it would be sad to see it go,” says signee Jean Kazezski.

She can’t immediately recall the first movie she saw at the Guild, but she remembers seeing Ingrid Bergman and Tyrone Power in movies here.

“It’s important to save these movie theaters,” says Will Toms of San Carlos. “It’s a great experience to watch a movie this way.”

Adams has her spiel down, and her success rate hovers around 100 percent. On this day she gathers 43 names, which puts her above 2,000, the number that compelled her to “go into high gear,” she says.

Sure enough, the next day she fired off a letter to one of her first signees, Menlo Park Councilman and former Mayor Ray Mueller.

There is precedent because a similar petition helped stave off closure of the CinéArts at Palo Alto Square, a two-screen art house in a commercial building set back from the El Camino.

CinéArts was set to fold in 2015, but customer support earned it a two-year reprieve. Adams is thinking longer term than that. Housing developments are coming to all the vacant Menlo Park car dealerships that can be seen from the Guild, and Adams is sure that will bring enough moviegoers to support a single screen.

She has mailed a personal entreaty to Facebook founder Mark Zuckerberg’s home address in Palo Alto, inviting him to become the Guild’s “angel investor.”

Zuckerberg has not, as of yet, gotten back to her, so Adams is out there with her clipboard every weekend, in the rain, in the wind and in the traffic. She got through two hip replacements by walking two blocks from her home to the Guild for movies, and she still sees every film as soon as it opens.

“The Guild is in a spot that has had a movie theater for 90 years,” she says. “We want to keep our theater in our neighborhood.” 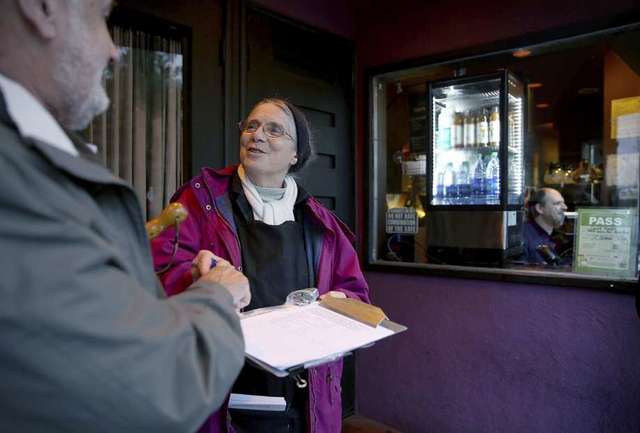