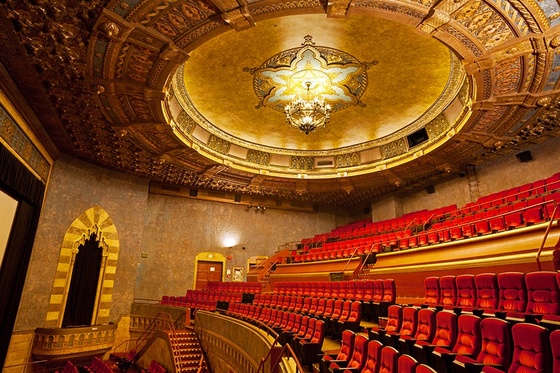 From 6sqft.com: 6sqft’s ongoing series The Urban Lens invites photographers to share work exploring a theme or a place within New York City. In this installment, award-winning photographers James and Karla Murray return with a look inside the spectacular Village East Cinema. Are you a photographer who’d like to see your work featured on The Urban Lens? Get in touch with us at tipsRegency Bruin Theatresqft.com.

Moviegoers at the Village East Cinema located on 181 Second Avenue may be surprised to learn that they are visiting a recently restored New York City designated landmark. The Village East Cinema has a fascinating history as one of the last surviving “Yiddish Rialto” theaters along Second Avenue in the East Village. Today, the cinema is known for premiering many independent films and an eclectic mix of art and commercial releases. The theater’s most significant visual aspect, however, is its main auditorium’s ornate and colorful ceiling, which is regarded as having one of the most remarkable works of plaster craftsmanship displays in New York City.

Village East Cinema was once known as The Louis N. Jaffe Theater, built in 1925-26 by the Brooklyn lawyer, developer and prominent Jewish leader Louis N. Jaffe. Jaffe built the theater as a permanent home for the Yiddish Art Theater to be devoted to the work of Maurice Schwartz, a renowned Yiddish speaking actor known as “Mr. Second Avenue.”

The Yiddish theater produced many of the creative figures of the 20th century American stage, including actors, direcAccording to the Landmarks Preservation Commission’s Report prepared by Jay Shockley, the main theater auditorium ceiling has a central shallow dome with an elaborate circular surround, plaster fascia grilles alternating with plain panels, a central medallion with a six-trefoil-pointed star within which is set a Star of David and a rosette, and an elaborate double-tiered metal chandelier. When converting the interior into a multiplex movie theater, only small rectangles were cut out of the rim of the spectacular domed ceiling to accommodate the film projector port and ventilation grilles.tors, writers and designers, and had a major influence on theatrical form and content.

Theater architect, Harrison Wiseman, designed the large 1,252-seat theater with a full balcony in the neo-Moorish style. William Pogany acted as a consultant for interior decoration and according a 1926 article that appeared in the New York Times, the theater was completed at a cost of one million dollars.

Yiddish theater was performed at the Jaffe Art Theater from 1926-1945, but the theater itself changed its names numerous times and housed many different Yiddish theater companies. The theater later showed vaudeville productions and was used an off-Broadway theater venue, housing the original productions of “Grease” and “Joseph & the Technicolor Dreamcoat,” which both went on to Broadway.

The theater also was used to show burlesque, dance, concerts, and movies but finally closed in 1988. The interior was converted into a complex of seven movie theaters in 1991 in a way that retains most of the original spaces, but with new uses. The orchestra floor level of the original auditorium was removed and a new floor level inserted at the height of the stage. Two new double stairways were installed to connect this level to the balcony level so that the auditorium became the main movie theater in the complex with 440 seats.

The rest of the auditorium ceiling has lavish and intricate polychromatic plaster honeycomb work composed of strap work with bossed pendants, faceted eight-pointed stars and rosettes, with a decorative tile-like border along the walls.

Despite the reconfiguration, the Jaffe Art Theater building is remarkably intact and is still one of the most notable polychrome theater interiors in New York City. The building even retains Mr. Schwartz’s impresario apartment above the theater. The theater is listed on both the State and National Historic Registers and its façade and interior including the lobby and domed auditorium are designated New York City landmarks.

The ornate plasterwork of the ceiling of the auditorium was recently restored as leaks in the roof and building envelope had caused damage and it was in danger of falling. CTA Architects was hired in 2012 to repair, replace, restore, and reinforce the ceiling of the cinema while the cinema remained open to the public. A suspended scaffolding and netting system was erected at the rear portion of the theater to protect the public while drawings and specifications for the restoration and consolidation were prepared. CTA Architects found that the ceiling surrounding the central dome was created from a repeat pattern of approximately three-foot square panels suspended from wire and burlap/plaster encased straps from a grid of iron bars.

The bars, in turn, are suspended from the truss and roof deck above a sizeable attic.

Since the ornate plaster ceiling was originally created and installed in standardized panels, it allowed the restoration team to remove those requiring repair, and also to use them to create molds for casting replacement panels. The work was executed by the Evergreene Architectural Studio and completed in 2015.

“In addition to the full consolidation of the existing ceiling, the project included reinforcement of the iron hanging structure, repair and replacement of damaged and missing panels, and a careful inpainting to match the original polychrome finishes. Work also included the restoration and repainting of the domed portion of the ceiling to its original grandeur. All work was reviewed and approved by the Landmarks Preservation Commission Staff,” says Daniel Allen, Principal at CTA Architects.

The ceiling restoration work was such an incredible achievement that the owners, architects and craftspeople were recognized in 2016 by the Greenwich Village Society for Historic Preservation for their commitment and quality of their work in contributing to both saving and revealing the history of this important New York City landmark.

Link to the story and extensive photo gallery: https://www.6sqft.com/the-urban-lens-inside-the-village-east-cinema-one-of-nys-last-surviving-yiddish-rialto-theaters/ 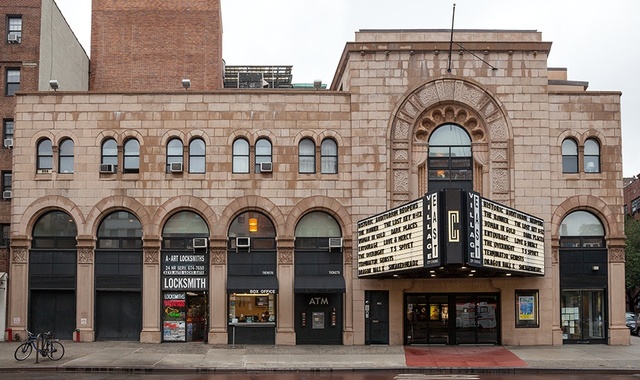 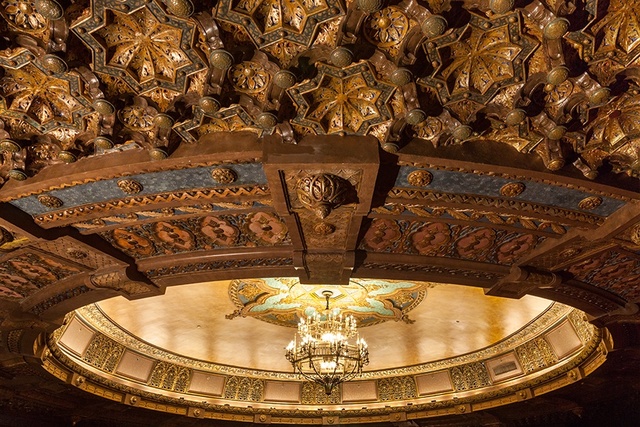