Canby, MN - With hundreds pitching in, western Minnesota residents bring the Canby Theatre back to life 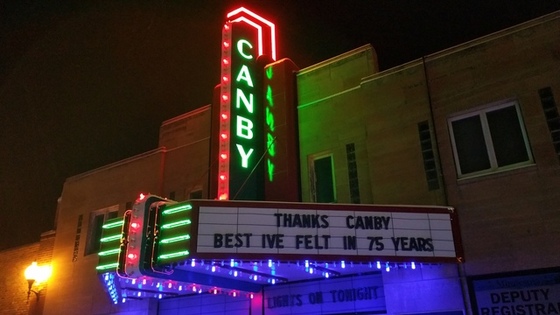 From the Star-Tribune: It’s a plotline straight out of a Mickey Rooney-Judy Garland flick from the 1930s: “Hey, kids! Let’s fix up the old barn and put on a show!”

And that’s what they did, hundreds of people in and around this western Minnesota city of 1,800. They came from Dawson and Minneota, from Marshall and Porter. They pitched in and brought back to life the Canby Theatre, opened in 1939 as a grand movie palace and closed in 2012 as a tired mess. Electricians and plumbers donated their skills. The mayor hung drywall and acoustical tile.

Across the area, even over the nearby border with South Dakota, cities and civic groups raised money through bake sales, burger fries, music shows and cruise nights. They sold calendars and $200 sponsorships for the theater’s 210 seats. They put jars on store counters and dropped in their spare change. Local businesses donated money and bought ads.

Out here in the heart of the Minnesota prairie, the people raised $300,000 from their own pockets to buy the theater and renovate it for the 21st century with digital projectors and reclining seats — and, more important, to send the world a signal that their town is still going strong.

Since the theater reopened in the spring of 2015, “it’s brought people back to our town,” said Gene Bies, who was mayor when the city decided to buy the closed theater and get it running again. “The streets were bare in the winter — there wasn’t a vehicle on Main Street at night. Now people come from 50 miles away.” ‘An extended family’

On a recent night, the neon lights of the marquee glowed through a dusting of fresh snow. Cars and pickups were parked for two blocks along St. Olaf Avenue.

Inside, the line was out the door as the theater staff — all volunteers from the community — scrambled to take tickets, sell popcorn and direct traffic.

The show on this night is the premiere of “Rogue One,” the latest installment in the “Star Wars” saga, and Canby is seeing it at the same time as moviegoers in New York, Chicago and Los Angeles.

“I thought they were a little crazy” to buy the theater, said James Zahnow, who grew up in Canby and now lives in Marshall. But he pitched in to help build the new concession stand and now drives 30 miles to town to see a movie about twice a month.

Brian McKeen works at Jim’s Market, the town grocery store. Earlier in the evening, he delivered ice for the pop machine. He’s at the theater on this night as a moviegoer, but he often volunteers to work the concession stand.

“It’s great to have a theater in a town this size,” McKeen said. “Especially something that’s unique, that’s not a cookie-cutter.”

Tesch is unpaid — in fact, he said, he throws some of his own money into the theater’s pot when needed. Although hundreds contributed to the renovation, the theater now depends on a core group of about 20 volunteers to keep it running. And that group “is really like an extended family,” Tesch said.

Look no further than the ticket booth, where Tesch’s mother, Myrna, works every night from 6 to 7:30 to handle the sales.

“I’m here as long as he is,” she said with a fond glance at her son, who was filling bags of popcorn. “Apparently, I’m doing an OK job — he hasn’t fired me yet.”

Most of the volunteers grew up in Canby, even if they don’t live here any more.

Nathan Schmig is a garbageman in Minneota, about 18 miles away. He volunteers at the theater just about every weekend, often with his wife and two teenagers.

“It’s a fun family activity,” Schmig said. “Do what you can, help when you can.”

Jeff Ferguson recently moved back to town from the Twin Cities. A creative services manager with Thomson Reuters, Ferguson spends three days a week in Eagan and telecommutes the rest of the time.

Growing up on a farm made Ferguson handy with tools, and he took on the job of rebuilding the theater’s battered, rusted marquee, working weekends and evenings for an entire summer.

“We all put a lot of blood, sweat and tears into this place, and we want to see it continue,” Jeff Ferguson said. “Everybody wants to see it succeed.”

It’s not quite two years since the theater reopened, but the luster hasn’t worn off for Canby and surrounding communities.

“It’s been like a revival,” said Renee Miller of Canby, whose favorite attraction is the classic film festival the theater screens for two months in the fall. Miller said she went to 37 movies in September and October.

“But who’s counting?” she said with a laugh.

Link to the story: http://www.startribune.com/with-hundreds-pitching-in-western-minnesota-residents-bring-the-canby-theatre-back-to-life/409000755/#1 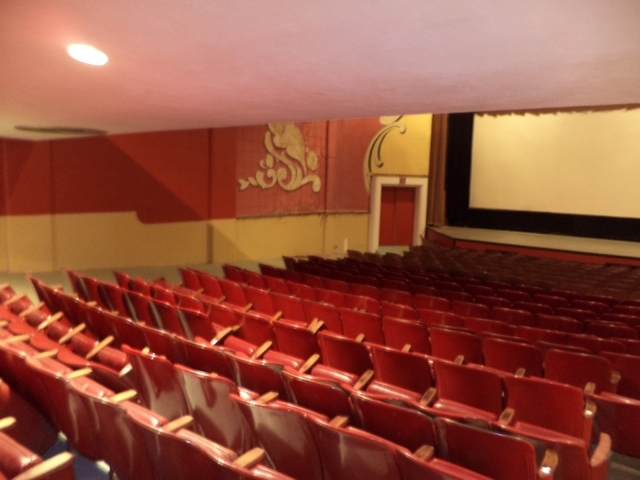 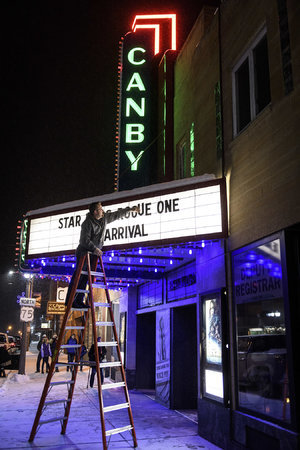