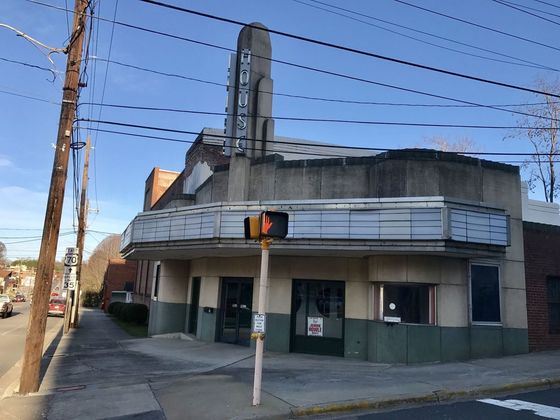 From mcdowellnews.com: The Marion Event Center is no longer operating and a “for sale” sign is now in the front window of the old House Theater building.

In May of 2014, Mike Cinquanto and his mother and stepfather, Esther and Doug Williams, started working to restore the old theater at 90 E. Court St. and operate it as the Marion Event Center. They did extensive renovations to the interior and fixed up the restrooms. Over time, the family removed layers of Formica, plaster, chipped paint and mold from the structure. They restored the interior so it would resemble a nightclub from the 1950s, according to an article in June 2015.

“We would like to use it as a rental for weddings, anniversaries and class reunions,” said Cinquanto in June 2015. “We want to make it available for things like company Christmas parties and corporate parties. I’m hoping to get the Board of Realtors to come down here and use it for their Christmas party. We just want to get the community back in here.”

They had also planned to restore the exterior and have the marquee and neon sign restored to its former glory.

Samantha and Michael Chambliss came back and did another show there later in the year.

Despite these successes, Cinquanto said recently the venture just did not work out.

“We tried, anyhow,” he said to The McDowell News. “We had some really good stuff. We just couldn’t seem to get the business rolling. We just had to close her down.”

The commercial building covers approximately 7,000 square feet and has a stucco and brick veneer exterior.

“The House Theatre is an Art Deco-style gem that has retained its original detailing on the exterior but has been modernized in the interior,” reads the listing with Joanne Howle Realty. “Built in 1950, this theatre sits on the corner of East Court and Garden Street in the heart of Marion right behind the McDowell County Courthouse. The marquees wraps around the corner entrance and the vertical sign has a great deco front spelling out the name of the original owner and operator of the theatre.”

The listing adds that the space contains more than 6,000 square feet of heated and cooled space and “has a myriad of future uses.”

The House Theater first opened in April of 1950. Architect C.C. Benton from Wilson designed the structure, which featured for that time state-of-the-art staggered seating and the most modern film projectors. The first movie screened there was “Wabash Avenue” with Betty Grable. During its years in business, the theater not only showed movies, but also had live musical acts perform. Country music legend George Jones was one of those.

The theater closed in the late 1970s and has since housed numerous different businesses. At one time, ministers used it to show Christian-oriented movies and then it became a video arcade. It was a weekend venue for local country music acts. At one point, the local Republican Party used it as a headquarters.

The Website www.cinematreasures.org is an online guide to more than 47,000 old and new movie theaters from around the world, both closed theaters and active ones. This Website features the House Theater along with a photo and some background information. You can see it here at http://cinematreasures.org/theaters/18643

On this Website, several people also commented about the House Theater and its current condition. Some of these comments go back more than seven years ago.

“It’s in dire need of restoration, but I fear the local community has little interest, but it would be great to restore and convert to a film revival house … Marion is a very small town,” reads a comment from 2010.

“Yes marion is a small town,” reads another person’s comment from 2012. “it is a town full of greedy people who care nothing about history. if someone tries to restore the theater. the city council would thro every road block they could in the way. if they do not get something out of it. it will not get approved. marion id a dead dead town.”

“I lived in Marion from 1972-1986, and it was, in fact a movie theater,” reads still another comment from 2016. “And was open until 1982, I believe it was. The McDowell Twin Cinema opened out on the 5-lane, along with a couple additional restaurants, and it pretty much spelled the end of the line for the House. As for myself, the only theater to go to there in my childhood was the House. I saw countless movies there, including Jaws, Jungle Book, Fox and the Hound, Pete’s Dragon among others. It’s sad to see it languish in such a sorry state. I live in Pensacola, FL now, where they just recently restored the old downtown art deco theater, and it would be nice to see a similar restoration on the House Theater in Marion.”

He said despite all their work, many people would not come in and the building still had the reputation as a “moldy old place.”

For several months, the county used the building for district court while the courthouse’s lower courtroom was being renovated and updated. Cinquanto said that helped him financially but the place as an entertainment venue was not successful.

“There’s been other people who have tried it as an entertainment venue on a bigger scale than we did and couldn’t make it,” he said on Thursday.

The place is now owned by Southern Star Properties, LLC.

“I would love for it to become something Marion could be proud of,” said Gary Walker, one of the owners. His sister Cindy Kisner is the other owner.

Steve Jones, owner of Joanne Howle Realty, is the agent for the sale of this property.

The building was put on the real estate market on Aug. 3, 2016 when Cinquanto was still using it as the Marion Event Center. “We just didn’t do any signage,” said Jones.

Cinquanto stopped operating the Marion Event Center around three to four weeks ago.

Jones said he would love for the old House Theater to become something like the Grey Eagle in Asheville. That place, which is considered one of the nation’s top 25 live music venues, has hosted nationally known performers like Ralph Stanley and the Avett Brothers. It also serves up “original and creative meals and an ever-expanding beer selection.”

The old movie theater is listed for sale through Joanne Howle Realty at the price of $269,900. A “for sale sign” is inside the front window. 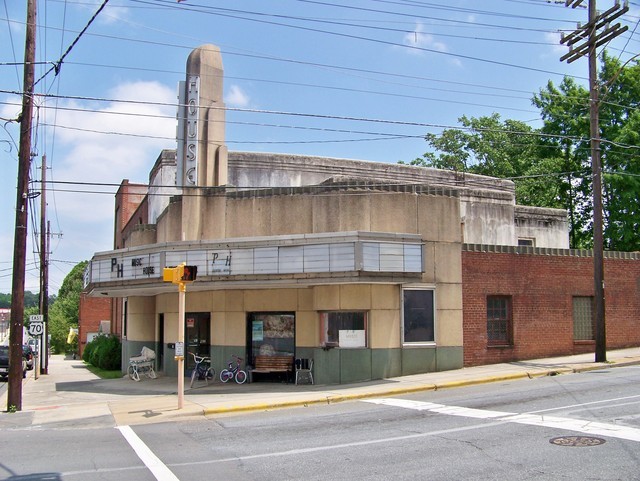