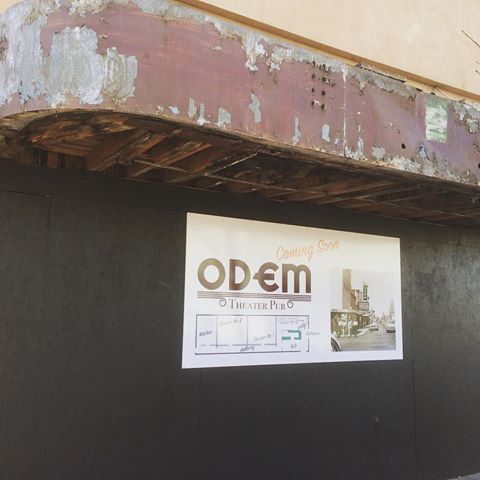 From bendbulletin.com: For a glimpse of the future of downtown Redmond’s entertainment options just look back to the 1930s.

That’s what Ted Eady’s doing. Eady, who owns several properties in downtown Redmond, has historic designs for the slender, two-story brick building on 349 SW Sixth St.: Return it to its former theatrical glory.

Over the past year, Eady and his son, Evan, have been working to restore the movie theater, which opened in the 1930s, he said. Currently the building is an under-construction maze of century-old brick, exposed insulation and creaky wooden stairs.

“We call this the mineshaft,” said Evan Eady, 26, descending into the ancient basement.

The duo have a vision of something more complete.

“We’re in this auditorium right now,” said Ted Eady, 58, leaning over a set of blueprints. “This is the pub area on the other side of the wall. We’re going to have 17 seats in the pub and 40 seats in each of the two auditoriums, with stadium seating for the back two rows.”

The Eadys have decided to call the theater Odem Theater Pub after the building’s former owner — historic Redmond planner, civil servant and theater mogul Milton Odem. It is scheduled for a summer opening. And even though there’s still some work to do — soundproofing, sheet rock, roofing, electrical — the Eadys are confident.

“I suspect I’m a bit manic,” Ted Eady said. “I’m not a manic depressive because I don’t get too bummed out, but I’m definitely a glass half full kind of guy.”

The renovations will try to keep a bit of the former Odem flavor, Eady said, pointing to a 90-year-old wooden stage that will be a part of a bar in a few months. Leaning against the wood were four letters — O D E M — that he found in the basement of the building.

“We don’t know what the original sign from the ’30s looked like because we haven’t found any pictures of it, but finding these in the basement spelling what they spell in an art deco style that was popular in the ’30s — I’m beginning to suspect this was part of it,” he said, adding that he’s going to try to restore the old marquee sign that’s on the front of the building.

And while the building itself might pay tribute to the past, the theater’s future programming and food offerings have a more modern feel. Eady said that he’s drawing on theater chains that are popular these days for inspiration — Alamo Drafthouse and Portland’s Living Room Theaters chain, for instance. He envisions a place where people can come and have dinner and drinks while watching original programming and films you won’t typically find at corporate cinema chains.

“We want to show films that will be in contention for best picture, not necessarily the newest Marvel superhero movies,” he said. “We’ll show art house films, for sure, but we’ll show anything that we think is good that we can get our hands on.”

Adding in the fact that he also owns the vacant lot next to the building and has plans to turn that into an open-air music venue with expanded pub seating, and the future of entertainment in Redmond sounds like it could have potential.

“Redmond’s not as cool as Bend, I don’t know if you’ve heard,” Eady said. “So, we would like to do something they don’t have in Bend. It’s such a small place and so elaborate, and it has the history. It was a movie theater for a long time in the community, so it just seems right.”