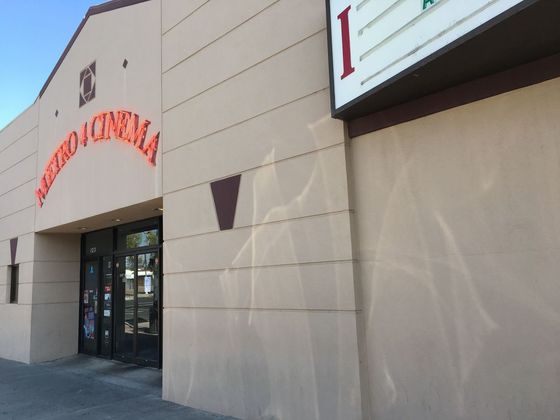 From The Sentinel: Many residents were upset when news that the Metro 4 Cinema in downtown Hanford was going to close in July, but a large response from the community kept the theater’s doors open; and now it seems there is a possibility the theater will stay open for good.

What could save the theater is a model from the company Movie Heroes, which asks customers to pay a monthly membership fee in order to watch an unlimited number of movies.

Filmmaker Matt Sconce and his business partner, Keith Walker, used the exact same model to save their hometown movie theater in Oakhurst.

Sconce said he found out about the Metro 4 from a friend, and rushed to Hanford the day before it was set to close to provide the solution to the theater’s problems.

On Oct. 1, Sconce and Walker will officially take over ownership of the Metro 4 Cinema.

Along with unlimited movies, the monthly membership will include discounts on food and drinks. For those not wanting a membership, ticket prices will be lower, Sconce said.

Walker likens the system to a “brick-and-mortar Netflix.” He said many customers have told him that the system takes the guesswork out of watching movies.

If customers don’t like a movie, they can simply walk out without feeling like they wasted their money.

“They no longer have that fear of not liking the movie they went to see,” Walker said. “There’s no guilt.”

There’s also no monthly commitment, Walker said. Customers can buy memberships for a month without having to renew every month.

Walker said it was a combination of things that made them want to save theaters: first and foremost was a love for their hometown theater, but also their desire to help others.

With their first project, Walker said they essentially let the people in the town of Oakhurst decide if they wanted to save the theater, and they did.

Not only did the system stabilize the Oakhurst theater, but sales have tripled, Walker said. Movie Heroes also helped a theater in Coalinga stay open.

“We love helping theaters with history that people care about and are willing to preserve,” Sconce said.

In Hanford, Sconce said the monthly membership will be $19.95 per month for one person or $34.95 for two people. He said child rates are still being finalized.

Walker considers the model “innovative” and “liberating,” and hopes it will turn into a movement with more and more theaters adopting this method.

“We’re hoping this not only saves the theater, but revitalizes peoples’ love for movies,” Sconce said.

Mai Xiong, general manager of the Metro 4 Cinema, said she was extremely excited about the changes at the theater and hopes everything turns out great for the theater and the community.

“I’d love to thank that community,” Xiong said. “Especially all those people who visited the theater and expressed their support and happiness when we stayed open.”