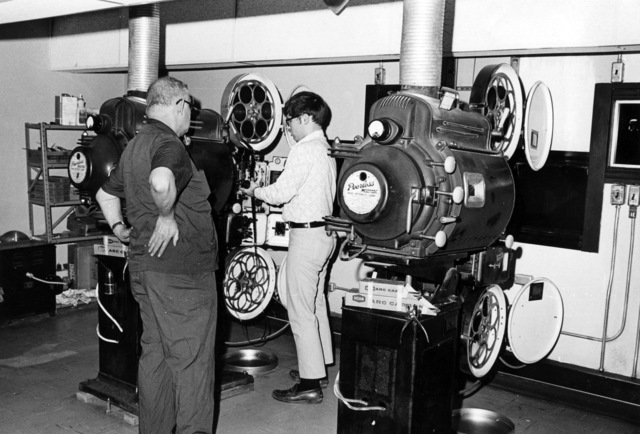 The Edmond Plaza opened on Thanksgiving Day in 1967 with “The Dirty Dozen”. It was originally a single screen theatre. It was owned by Spectro Theatres who later twinned the theatre.

It went through a couple owners and was then taken over by Main Street Theatres in 1981 until 1983. It then went through a number of owners again. With the large number of screens opening in the area it could not compete and closed its doors on July 8, 1993.

The Edmond Plaza Twin was taken over by Main Street Theatres in 1981, not 1983. I bought it from them on 3 February, 1983, and owned it until 7 February, 1991. It was operated for about a year, after that, by Precor Entertainment, then closed forever.

When the theatre opened on Thanksgiving Day, 1967, the first movie it showed was “The Dirty Dozen."
Ken Shade

When it opened, it had an entrance on the west side of the shopping center. Sometime later, the entrance was moved to the east (or back) side. I visited the theater many times as a kid, and for a while, a sports bar opened in its place – no idea if that is still the case.

Modern photos of the Plaza Twin Cinema can be seen on this fine site;
http://www.roadsideoklahoma.com/node/339

The Edmond Plaza Twin closed July 8, 1993. On September 15, 1993, an auction was held. The theater’s marquee sold for $1. Theatre seats were auctioned off bringing five cents per seat.