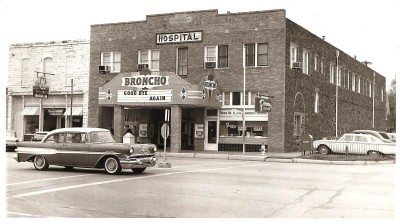 Edmond’s Broncho Theatre was named after the bucking mascot of Oklahoma Central University. It was opened on January 10, 1936. Both the exterior and interior of this clean little cinema utilized bold neon lighting to achieve colorful effects.

Oddly enough there was a hospital located above the auditorium. How much rest could those patients get when noisy musicals were shown?

In its later years of operation it was known as the Academy Theatre from September 1972. It closed in the 1970’s.

Some additional information:
The theater, opened on Jan 10, 1936, was located at 1 S. Broadway (Main & Broadway) on the former location of the Joyland Theatre Airdome. It advertised carpeted aisles, draperies, restrooms and two projection booths with synchronized sound.
The theater was built by W.Z. Willie Spearman who operated it until it was taken over by his son. The younger Spearman operated the theater until he sold it to R.R. McCoy. The theater operated on and off until the 1970s.
The hospital was opened on the second floor on February 2, 1947.

On this site it is listed as the Acadamy Theatre. Included are clear vintage photos, recent snapshots, and a brief history …
http://www.roadsideoklahoma.com/node/338

I’m on a personal quest to find photos of the auditorium, lobby, booth and exterior of The Broncho, other than the ones mentioned above and the one I just added to this site. I’ve had no luck with the members of the Spearman family that I know. If anybody visiting this site has a lead on any, I’ll be very grateful.

My above request also applies to the later years, when it was known as The Academy."

Raybradley, That site no longer has any photos at all. They refer you back here. Were the photos the same few that are in the Max Chambers library? It was only the Academy for a short while before it closed. The type of photos I am searching for are ones that show the entire lobby (or at least just more than the concession stand)or the screen/curtains/auditorium.

Lauren, “broncho” isn’t a mispelling. It is a less common, but legitimate, alternate spelling. In fact, there is another “Broncho Theatre” in Indiana or Illinois.

Okie, where did you get the information about the lobby? That is very interesting. Do you other interesting things about the Broncho?

Thanks, Lucky, but I already have those. They show the outside and ticket booth. There are also two shots of people at the concession stand. So, my quest for lobby, auditorium and other photos continues.

Though it mispells the theater’s original name as Bronco, the October 2, 1972, issue of Boxoffice ran an item noting that this house had reopened as the Academy Theatre following a $75,000 remodeling. The Academy was operated by a new theater circuit based in Okalhoma City called the Heisman Theatre Corporation. Heisman was soon to open new four-plexes in Norman and Stillwater.