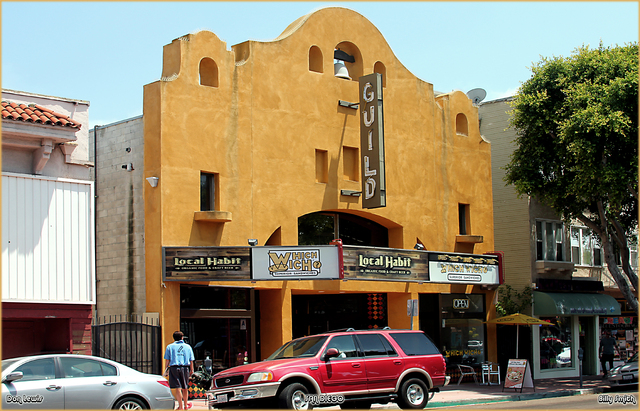 The Hillcrest Theater was built in 1913 as a silent motion picture house. It has the distinction of being the first film theater built in San Diego that was not downtown. Though small in size, it also had a balcony. It was distinctly Spanish Colonial in style, and even sported a bell tower at the apex of the facade.

For a reason unclear, it closed in 1917, but was re-opened in the 1930s by the Fox chain, who ran it for two decades. It was renamed the Guild in the 1950s but by the 1970s was showing adult films. Landmark took it over in 1978 and it became a popular art house. By 1996, a theater group called “Crazed Imaginations” led the theater audience in late-night sing-along showings of the film “The Rocky Horror Picture Show” which was a big hit.

Sadly, in 1997, the theater was closed, the same year the historic Park Theater was closed a few blocks away. In 2002 an entirely new structure replaced it, the new one with a facade made to simulate the appearance of the original, sans the charming interior and details. The new structure is a designer furniture showroom today.

Southwest Builder and Manufacturer of March 22nd, 1913, announced the issuing of the building permit for this theater. The owner of the theater was J.K. Stickney, the projected cost was $7500, and the building was described as being built of hollow clay tile (a commonly used construction material in early 20th century Southern California, but which was later found to be highly susceptible to damage in even moderate earthquakes, and very costly to retrofit- which may account for its having eventually been demolished rather than renovated.) The architect is not named, unfortunately.

Are we sure the entire building was completely demolished? The presence of the “hut” on top of both buildings would indicate extensive remodeling, but total demolition seems a stretch.

Does anyone have pictures of the demolition?

I believe the original intent was to preserve the facade of the building, but it was determined to be unstable and not up to code. The current facade is a replacement.

The “hut” is in fact on top of the building next to the Guild, not on top of either the old or new building.

“The Rocky Horror Picture Show” showed at the Guild for a number of years up until 1984, when it switched over to the Ken, where it ran for many years before switching to the Guild some time in the ‘90s. The last movie shown at the Guild was “Female Perversions,” which despite its title was not a throwback to the theater’s adult days, but a fairly good movie starring Tilda Swinton. (I attended the final showing.) The Guild closed the same night as Landmark’s Park Theater (http://cinematreasures.org/theaters/1563).

I remember seeing “The Cook, The Thief, His Wife, and Her Lover” at the balcony of the Guild. It was a charming cinema. Much missed!

I went to this theater from the time it ran B horror movies during Saturday matinees in the 50s when I was in grade school until seeing “Juliet of the Spirits” during a weeknight when I was in high school. “The Monster that Challenged the Earth” and “The Incredible Shrinking Man” gave me chills for a long time.

If memory serves me right, (and it might not..)I recall this CLASSIC, BEAUTIFUL little neighborhood theatre being called the HILLCREST, (for obvious reasons)in the 1950’s well into the ‘60’s; then, whoever took it over, cornered the foreign-movie market(pre-Landmark?)and re-named it “The Guild”, which angered me as I’m sure it also did the local Hillcrest folks…The theatre’s original design I remember, was similar to the Casino, way down the street, as well as the Strand, in Ocean Beach; all built around 1914, possibly around the same time as the 1st EXPO, which is logical… this way showing off not only downtown San Diego, but the NEW and NICELY laid out growing communities up the hill, and way out at the beach (with NEW Freshly-cemented streets, lighting by electricity, and extended rail transportation!) I remember they ran the Saturday KIDDIE MATINEE circuit, and then, later in the '60’s, titles like Kubricks’ “LOLITA”. I cannot find a decent PICTURE of this former landmark(no pun intended)as the “HILLCREST”. The historical society’s ONE photograph was taken up the street, BARELY recognizing the marquee which had BARELY enough room to spell out the title of a 1954 Victor Mature flick: “Chief Crazy Horse”!!