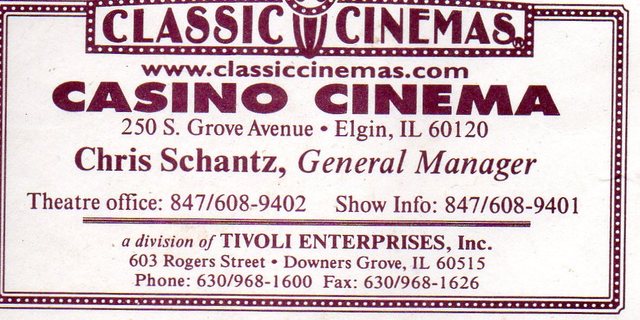 The three-screen Casino Cinema opened on December 25, 1994 at the Grand Victoria Casino Elgin, the same year the riverboat casino opened. It was operated by the Classic Cinemas chain.

The theater lasted until 2002.

DOES ANYBODY KNOW WHY THIS THEATRE CLOSED AFTER SUCH A SHORT RUN? CLASSIC CINEMAS USUALLY RUNS GOOD THEATRES.

I would assume that the casino didn’t want people spending time in the movies. They’d rather have people put money in the slots. Also, I believe people were dropping off their kids there for hours while the parents left them for the casino.

Hi folks, had connexion problems couldn’t view ur page…
glad to see ur blog is back online, ciao! bonus]www.bonus.to/]bonus[/url][/url]

Has any of the Cinema Treasures “Faithful” ever been to this theatre? If so, could anyone describe it to me?

The theatre was 3 screens and a concession counter. One theatre to each side of the counter and one behind it. The theatre was built at one end of the Riverboat Pavilion. There was no lobby or bathrooms in the theatre because the pavilion had plenty of both. I remember reading that when the Casino was negotiating with the city of Elgin one of the requirements was they include a theatre or other “family” entertainment. At first the theatre did pretty good business. People would buy concessions there while waiting for the next cruise to load and some families would split up part getting on the riverboat and part seeing a show. Once the boats stopped leaving the dock, and people could come and go as they pleased business began to drop. Eventually the Casino wanted to expand there offices and patitoned to remove the theatre so they could use that space. With the village’s OK the theatre was gone.

I ride my bike on the Illinois Prairie Path which runs behind where the casino entrance (I usually get on the path in Elmhurst or Villa Park and I ride to Elgin and back). I always used to see the sign for this theatre. Then, one day, there it wasn’t!

The function of this theatre should then be “Casino” or “Office Space”.