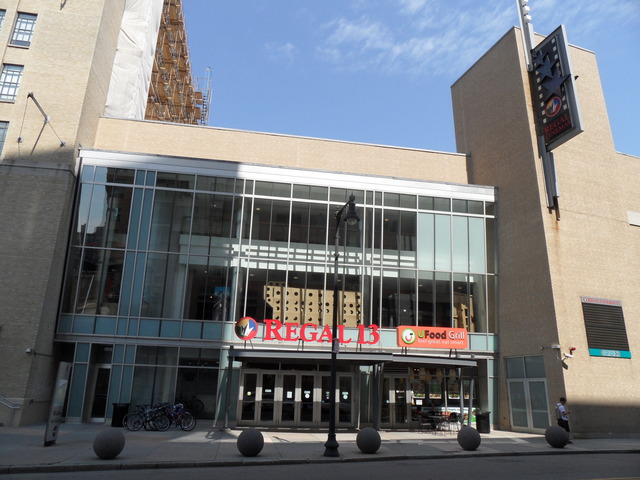 The first movie theatre built in Boston since 1984, General Cinema’s Fenway 13 complex opened June 23, 2000, finally bringing stadium seating and digital sound systems to the city. It had a total seating capacity for 3,100.

The two largest screens, 62 and 56 feet wide, are known as the “Screen Monsters” because of the theater’s proximity to Fenway Park. They are the first large screens in Boston since the Charles closed in 1994.

The theatre is part of the Landmark Center, a 1928 Art-Deco style Sears catalog sales and distribution center which has been recycled into retail and office space.

An anti-trust agreement with the state and federal governments required AMC to sell this theatre after acquiring the Loews Cineplex chain. It became a Regal cinema on September 15, 2006. With the introduction of recliner seats in the early 2020’s, the total seating capacity has been reduced to 808 and two of the largest screens have been closed.

I don’t know if here are any promotions unique to this Regal Theater but Regal offers (on its website) two types of “VIP Tickets”. The cheaper one is valid after a film’s opening period (usually about two weeks) and the more expensive one is valid anytime. These tickets are also available through AAA and possibly through other sources such as those “Entertainment” books.

Now that the Circle Cinemas have closed, this is one of only two remaining movie theatres within Boston city limits. (The other one is AMC Loews Boston Common.)

A small fire in the Regal Fenway a couple of days ago resulted in the sprinklers activating. Then no one could figure out how to turn them off. There was flooding and water damage to the complex which houses the cinema.

I’ve read that the theatre has been getting a little run down lately. Some people have even spotted rodents.

Oh, no! Really? I think that the reason that rodents end up in movie theatres is because people drop their food on the floor, which attracts them. I did see the 70th Anniversary screening of The Wizard of Oz in the Fenway Cinema a couple of years ago, and it was quite good.

I saw The Big Short here two days ago and can’t say enough about the brand new black leather luxury recliners. It’s an understatement to say they are comfortable. The auditoriums seem to have had some nice, albeit probably minor, renovations. Until recently I came here infrequently, even though it’s literally less than a mile from my house, but I think that will change.

This opened on June 23rd, 2000. Grand opening ad in the photo section.

The two largest screens 12 and 13 are not reserved seating. THE RPX theatre did not get the Regal Buttkicking Recliners.

Construction has started on a large new theater very close to the Regal Fenway. It’s the “MGM Music Hall”; will be operated by Live Nation and is very close to the Fenway Park Red Sox stadium. They give a capacity of “5400” but I don’t know if that’s 5400 seats or a combination of seats in the two large balconies plus standing spaces on the main floor. Live Nation also has the big new Oakdale Theatre on the outskirts of Wallingford CT.

Please update, 808 seats and 11 screens and rename Regal Fenway 11 and the two monster screens are not part of the movie theatre anymore. Only the 11 screens that got recliners a couple of years ago is still open. The two big houses wich one included RPX was given back to the landlord when the new owners are building new property. The Boston Globe article is https://www.bostonglobe.com/2021/01/06/business/developer-buying-fenways-landmark-center-152b-deal/

It’s a shame the two best auditoriums with big screen are gone. Photos in the photo section. Guess that the reason recliners never were installed in theatres 12 and 13