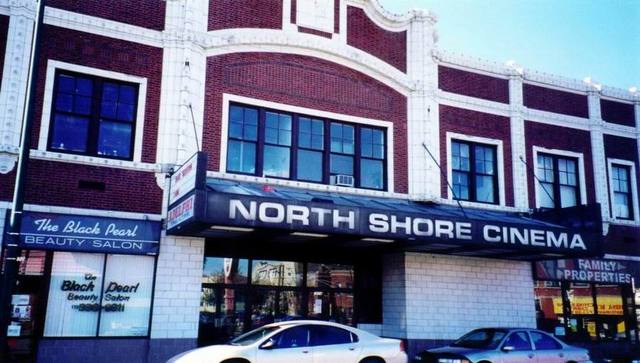 The Adelphi Theatre was opened November 10, 1917 with Emily Stevens in “Outwitted”. It was operated by the Ascher Brothers circuit. It was designed by local architect John E.O. Pridmore. The theatre stood on N. Clark Street at W. Estes Avenue in Chicago’s Rogers Park neighborhood.

In the 1930’s, the Adelphi Theatre received an Art Deco remodeling. The theatre was modernized during the 1940’s and again in the 1950’s. It began to show second-run features starting in the late-1960’s, and closed briefly in the early-1980’s, after several years screening Spanish movies.

In the mid-1980’s, the Adelphi Theatre reopened as the North Shore Cinema, but was again known as the Adelphi Theatre when it began to show East Indian films and became the premiere venue for Bollywood features in the Chicagoland area, despite its down-on-the-heels appearance both inside and out.

Chris: the earlier Adelphi Theatre is listed here as the Clark Theater.

An ad for Pittco Store Fronts (a division of Pittsburgh Plate Glass Co.) in the June 29, 1935, issue of Motion Picture Herald featured photos of the Adelphi’s entrance before and after the remodeling designed by Mark D. Kalischer.

When one enters “ Adelphi ” in the search bar for Cinema Treasures all that comes up are two theaters that are not in the United States — one in Rabat, Malta and one in London, England. I got here to the Adelphi theater in Rogers Park not by way of the Cinema Treasures search bar but by leaving the Cinema Treasures website and instead Googling “ Adelphi theatre Chicago ”. The Adelphi in Rogers Park was where my Aunt took me and my cousin in, I believe, the summer of 1957 to see James Stewart play Charles Lindbergh in the film “The Spirit of St. Louis” I was 9 years old at the time and it was only my 2nd visit to a movie theater and only the 2nd feature film I’d ever seen. I was quite impressed and had a hard time sleeping that night as scenes from the film replayed in my head all night long. Rogers Park was my grandparents neighborhood and was where my Aunt, as their child, had grown up. The Adelphi was her childhood theater. My Aunt, my cousin, and I were visiting from out town and staying with the grandparents that summer.

Fabfilmfan: Initial search on Cinema Treasures brings up a page listing only theaters of a given name that are currently open. To see a list that includes all the theaters of that name that have been closed you must go to the lower left of the map and click the link reading “All Theaters.” Here is the full page for the name Adelphi.

That said, there are still issues with the site’s search. Sometimes entire cities are missing from the drop-down menu and I, too, resort to Google to find their pages.

Thank you Joe Vogel. This afternoon I re-visited Cinema Treasures and discovered this “currently open” default to the search bar, but still did not notice the various tabs at the bottom of the map that would let me filter search results. Thank you for pointing this out. In my initial search last night I didn’t know the Chicago/Rogers Park Adelphi had been closed and in fact, demolished.

And still to this day, there’s nothing but a crater. They still haven’t built anything on the site. They haven’t even filled it in. It’s just a gaping maw. Very unattractive.

This opened on November 10th, 1917. Its grand opening ad can be found in the photo section