Demolition of the Historic Adelphi Theater 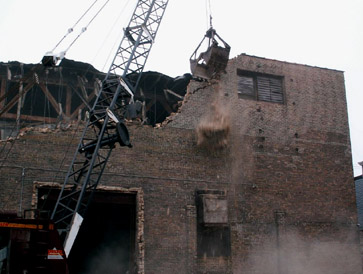 CHICAGO, IL — A sad day here as another one of Chicago’s historic theaters faces the wrecking crane. At around 2:00pm Friday, January 20th, the fight to save the Adelphi Theater was crushed as the wrecking crane opened it’s huge steel jaws on it’s bucket…. then closed the bucket’s jaws equally as quick…. then taking hold of it’s first few chunks of bricks and then dropped them from the bucket to the ground.

Within minutes most of the back wall of the theater that runs along Ravenswood Avenue was a pile of rubble ready to be carted off.

I volunteered to try to help reopen this theater. She was beautiful and will always be fondly remembered. At one point I fired up the original theater speakers and we watched matrix digitally projected. Of course I’m all about film, but I’m very glad to of had that opportunity.

Yet another one bits the dust. Why does this keep happening! I just cant stand this any more.

Sadly, we live in a world where many are selfish & unappreciate of architectural, cultural, & historical treasures. Reality can be harsh, but in the long run, these greedy/selfish developers & landlords are only devaluing themselves. Shame on them!!!!!!!!!! And double the shame on councilmembers who side with developers & their own interests, rather than that of their constituency. It’s an injustice to all!
To pay tribute to this superb theater, committee members should coordinate a fundraiser to have a representative feature of the theater rebuilt, & donate it to a local museum. It will document a committee’s determination to saving this historical structure, & it will show what was lost, & show how important it was, & it will continue to be. That’s the last resort & a blessing to the public for any committee. Please share your thoughts. – Michael from N.Y.

You’re absolutely right, Mike. Part of the problem is that American history is not exactly a very popular subject in our culture these days. We need more people that are appreciative of our rich heritage and fully realize that once a historical treasure is destroyed, it can never be brought back.

Face it,money talks,and developers don’t care about anything that dosen’t fatten their pockets.This theatre met the same fate that will EVENTUALLY claim ALL Chicago and it’s suburbs theatres.I’m afraid there’s no use fighting it.Take your hat off to them,they’ve won.

Thanks, Mike! It is urgent for us never to give in to those greedy developers. Determination leads to victory. We the people!!! We should all consider coming up with a proactive plan, rather than acting on a reactionary basis. Whichever buildings are not endangered at this point, focus on those, & organize a petition drive & letter campaign to encourage landmark status. That should work!

I’m amazed at the number of historic theaters that are still standing and have not been gutted and/or converted yet have no type of support group to help restore them and assist them in their continued usage. Of the seven historic theaters in my area, three still have no such group to help back them up. One of these is probably the only surviving neighborhood theater in the whole county. Cinematreasures definitely deserves at least a hundred rounds of applause for keeping track of all these theaters and their current situations. You’re right, it’s up to us theater buffs to at least make an effort to preserve what is left.

corvetteguy1963,
I can understand your discouragement, but being a Chicago-area suburban theater owner, I have to disagree with you about taking my hat off to them – they haven’t won entirely. We aren’t defeated yet. There are a number of us still doing a decent business and we plan to stick around for some time now. There are still enough people left out there that do appreciate older theaters, their architecture and the personal service they provide that you just can’t get at a multiplex. We’ve had a few close calls ourselves, but thanks to the loyalty of our patrons, we’re still here (knock on formica.)

Rather than throwing in the towel, please continue to support these theaters and encourage everyone you know to do the same. When you see a theater is being threatened by the wrecking ball, rally all the support you can and let your local government know that you won’t stand for this in your community. The harder you fight, the better the chance you have of winning.

But before it even gets to that stage, encourage everyone to fill the theater’s seats… that’s the best way to keep these historic theaters alive. The bottom line is ‘no business – no theater.’

I go ONLY to the tivoli, lagrange,ETC…I used to go to patio,montclare,portage,etc…I make it a point to stay away from new theatres[the term used loosely].Now my few choices are becoming fewer.This is the USA,MONEY WINS EVERYTIME!

When Bill & I first stepped foot into the theater, we were just in aww as to how she looked. We both looked at each other and knew that she had potential. After we got the keys and started working, I went off to the hardware store and purchased all the screw in fuses that had for sale, and tons of light bulbs. One of the things we noticed was that much of the lights didn’t work. I screwed in one by one until all the empty circuts were filled. And one by one lights started comming on. It was like she was becoming alive all over again. Then I ran back to my store, and loaded my car up with some old 8mm cartoons and an old revere 88 projector. Went over to the theater and told Bill, let’s try to see if we can get this to work. So bill set-up a row of seats in the auditorium as they were fallen over. I went up into the projection booth, set-up my grandmas old Revere, put on an old black and white Woody Woodpecker silent cartoon and watched. It was so amazing to see a cartoon on the screen. At one moment, as the light flickered it looked from upstairs that rows and rows of seats appeared with people sitting in them. I couldn’t believe what I was seeing. So I ran downstairs, but when I got there, what I had thought I saw was gone. I asked Bill if he saw anything, but he said all he noticed was a cold draft. I just can’t believe she’s getting destroyed…. All she needed was some little love, care and money to save her. The last owners had no intension on saving the theater. In the eighties when she still had her 1930’s marquee, they removed it and replaced it with the one that is on the building today. In addition to that, they errected drywall right in front of the beautiful detailed plaster that Bill and I took pictures of that was STILL INTACT. Yes, the Adelphi Theater had a hidden treasure right behind the drywall inside the auditorium. She stood tall, the test of time, the threat of demoltion and lasted for 88 years. It’s a shame she couldn’t last another 88 years. Boy they really knew how to build buildings then. Those arches that you see exposed in the picture are NOT made of steel. They are BRICK morterd together to form those arches. In 1917 I-Beam Steel wasn’t around yet. The entire walls and ceiling were had done by master platerman. Who with the art of their hand formed those curves and molded those ornimations. One can only imagin what that would take today, and how much money it would take to recreate that. It is true, once these works of art are gone, they are gone forever and can never be replaced!

what great memories.This has been a hard week for me. i was unaware that a gpoup existed regarding the Adelphi .Sadly my help whatever it might have been would not have mattered.I would love to see your photos.I have died a little with the destuction of all these great theatres on the northside for many years.Now yet another one.What is left,intact? Mitchell.

There is nothing left in Rogers Park.

No more Granada and Howard Theaters. The Morse Theater is still under the radar, but has long been converted from a theater, to a jewish temple, and now a shoe re-pair shop and warehouse a.k.a. Kobblers Row.

Tha Adelphi was, the last chance to preserve a historical theater in the 49th ward. This strip of Clark used to be called “the Rialto”, a theater district like many that were built along train stops in Chicago. If you look across Clark Street just North of the Adelphi, you’ll see a building with green trim. This also was once a theater, long gutted for retail. It is an unknown piece of history, an empty, forever “for lease” addition to the Rogers Park community.

For more examples of forever “for lease” developments, please refer to the huge Gateway Center strip mall on Clark and Howard, visit the Clark Mega Mall, and check on the former home of the Adelphi Theater on Clark and Estes in about a year.

note: pictures will be posted of the Adelphi Theater on Tuesday, January 31st, www.AdelphiTheater.org

Citizens for the Adelphi Theater

Here is the latest article of our attempt to save the Adelphi theater..

Citizens for the Adelphi Theater

Im sure one of our knowlegeable members can give me the name of the theatre formally located at 3947 S.Drexel Blvd Chicago IL, infamously associated with the El Rukn street gang. Thank you very much. Tivoli

Tivoli,
That would be the Oakland Square Theater..

Well, this will be my last post on the demolition page for the Adelphi Theater. Today, March 2nd 2006, the last of the theater was taken down. Now the only thing left is the exposed basement. The lobby and it’s ajacent storefronts have been demolished. You almost have to do a double take because it looks so horrible, it’s almost like an open wound in the middle of Clark street. All you see now is the scafolding and fencing surrounding the property that once was the theater. I as I feel many of us will truly miss the Adelphi Theater. Rest in Peace….

I know this post is late, but I remember driving by one of the theatres I worked in in the late 70,s and it was being torn down to be replaced with a one level parking lot till later is was replaced by an 31 story high-rise,but the vertical sign was still on the building,what a sad day.RIP Adelphi Theatre.