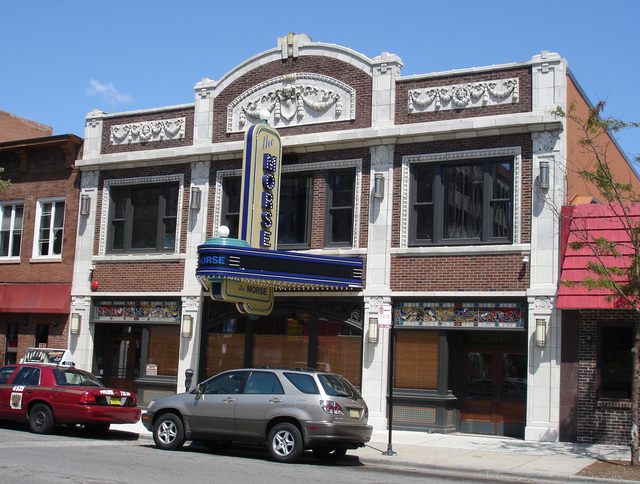 The Morse Theatre, located on Morse Avenue near Wayne Avenue in the Rogers Park neighborhood, opened in 1912 as a vaudeville and movie house originally seating 650. On March 19, 1938 it had been remodeled in Art Deco style and reopened as the renamed Co-Ed Theatre, playing on its proximity to Loyola University.

The Co-Ed Theatre closed in 1954 and from 1956 until 1977, it became home to a synagogue. In 1986, the building was converted into the Cobbler’s Mall, which included, as the name implies, a shoe repair store.

In 2008, the Morse Theatre was renovated and restored, and reopened in October 2008 as a venue for concerts, despite an arson attack in August. Live theatre, independent cinema, and children’s programs were also planned. It reopened early-2010 as the Mayne Stage. In March 2016 it ceased being a concert venue and will now host special events. In 2022 it became the Rhapsody Theatre, presenting live entertainment, magic shows, cabaret & chamber music.

Well it appears it’s days as a music venue are over. The below article states it will now only be used for weddings and private events.

good riddance. the mayne stage only caused me (& mrs) grief

Apparently the restaurant & storefront portion will be reopening as a brewery.

Skyline newspaper is reporting that Mayne Stage will reopen as Rhapsody Theater featuring live entertainment, magic shows, cabaret and chamber music, per Leslie Perkins, 49th Ward chief of staff. It is on page 3 of the current print version of Skyline. The online version however requires a $20 annual subscription fee to view.

Stone Real Estate listing for The Mayne Stage with some nice photos can be seen here.

Current article about the change to Rhapsody Theatre.