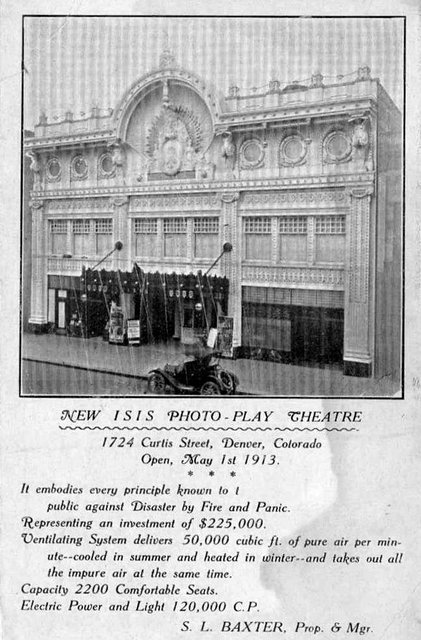 Opened in 1913. In 1953 it was briefly renamed New State Theatre. It was demolished in 1955 per Denver Public Library.

Monty-Denver – What can I help you with. I have a good collection of photos, both hardcopy and in jpg. format of most of Denver’s early theaters. Most were obtained from the Denver Public Library and the Colorado Historical Society. I can be contacted by email at or phone at (303) 692-1137. If you live in the Denver area I would be happy to show you what I have and share anything I can. I live at Leetsdale & Quebec in Denver and am home most days of the week. So you can send my an email or give me a call (just leave a message if I am not home) and I will get in contact with you.

Here are two photos of the Isis from a 1913 issue of the trade Journal The Moving Picture World. The pictures are rather small, but the interior photo gives an idea of just how big this theater really was. For such an early movie house the place was vast.

Mr. O'Malley, I’ve searched, in vain, for images of the Rococco interior of the Denver Theater, demolished not long after extensive and expensive renovations, including gold leaf work, mirror replacements, etc. My late husband worked there for years and took me through nearly the entire building in the very early 70’s after his Army stint. I never could figure out WHY they literally provided the idea for “They Paved Paradise”, leaving only the compass on the sidewalk, destroying a grand lady from the past,leaving the much less glamorous but more functional Paramount across the street.

There is an article about exterior lighting on Denver’s theaters in the October 19, 1912, issue of Electrical Review (Google Books scan) with a drawing of this Isis Theater captioned “How New Isis Theater Will Be Illuminated.”

The text of the same article has this information:

“The history of the illumination of Curtis Street is rather interesting and dates back a little more than four years. At that time one of the enterprising theater managers of Denver opened the Cameraphone Theater and installed some very elaborate illuminating effects. This was when the moving-picture business was in its infancy in Denver, and although the illumination on the Cameraphone gave it tremendous advertising, the quality of the shows presented were not on a par with the illumination on the outside and it eventually became unprofitable to operate. Later it was taken over by Samuel Baxter and renamed the Isis. Under the new management the lighting was discontinued and the quality of the shows bettered, but without the pulling force of the light it did not do a paying business. In the course of time the illumination which had been displaced was again installed and later increased, until today the theater has a total of 2,200 lamps and a candlepower of 8,500, and it is now one of the best payers of the several first-run houses.”

The article indicates that the New Isis was under construction, while the existing Isis was one of the seven movie theaters already in operation on Curtis Street between 14th and 18th Streets. So far I’ve been unable to discover what became of the first Isis when the new house opened. Possibly it was kept open under a new name.

An article in The Moving Picture World of January 1, 1916, indicates that the Strand Theatre (later the State), opened in 1915, had been built on the site of the first Isis Theatre. The article doesn’t say whether or not the first Isis operated under another name between the opening of the new Isis in 1913 and the old theater’s demolition.

this card in the Denver Public Library’s Western History Subject Index says that when the State Theatre was closed and demolished in 1953, its owners bought the Isis Theatre and changed its name to the New State Theatre.

Another card from the Index cites a January 1, 1955, item in the Rocky Mountain News saying that the Isis Theatre building was to be demolished. The Isis must have had the aka New State for less than two years.

Below copy courtesy of Matt Hyde via The Denver Eye Facebook page. (Under a vintage pic I also re-posted to the Isis photos Section.)

Motion Picture Herald, Jan. 1, 1955: “The New State, renamed from the Isis when it was taken down over a year ago by Norman Probstein, will be torn down to make way for a parking lot. This leaves one theatre, the Gem, in a block that at one time had four theatres. Others are also parking lots.”