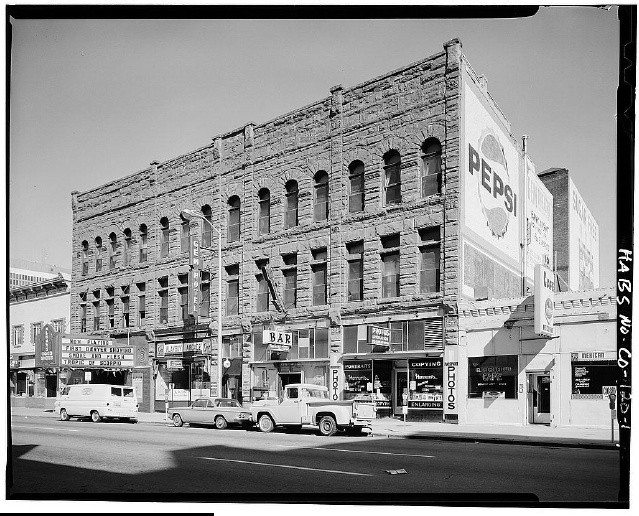 The Wonderland Museum and Variety Theatre was opened in 1890. It had many name changes over the years, and closed as the Gem Theatre in the late-1960’s, when it had been operating as an adult theatre.

The correct address for this theater is 1746 Curtis Street, and its final name was Gem Theatre. In the 1920s and 1930s it was most commonly listed with 960 seats, but in later years the FDY listed it with between 600 and 700 seats. The three-story Romanesque Revival structure at 1734-1746 Curtis Street was called the Chicago Block, and it housed a theater at the address 1746 from 1890 on.

In 1894, the house became the Curtis Street Theatre, and then from 1895 to 1899 it was the Orpheum Theatre. It underwent improvements in 1899 and reopened as the Denver Theatre in September. This might have been when the auditorium was expanded to an east-west alignment, running behind all the storefronts in the Chicago Block.

In 1902, it was renamed the Curtis Theatre, but closed after suffering a fire in May, 1904. It reopened on October 3. The house was closed during the 1909-1910 theatrical season, but was remodeled in 1910, reopening as the Iris Theatre, a motion picture house, on June 4.

For the next several years the Iris was one of Denver’s most popular movie theaters, part of the Curtis Street theater district described in the July 15, 1916, issue of The Moving Picture World:

“Denver’s moving picture row now extends two blocks along Curtis street, the city’s main thoroughfare. Beginning at the east end is the Iris; directly across the street is the Paris and on the same side is the New Isis with the Plaza opposite. In the next block is the Strand with the Princess within a few doors. Across the street is the Colonial. Around the corner on Sixteenth street is the Lyric which was built on the site of the Theatorium, Denver’s first picture theater. Across Sixteenth street from the Lyric is the Tabor Grand and on Curtis below Sixteenth is the Rialto. There are five other houses in the downtown section on Larimer street—the Joy, the Fun, the Grand and the Annex, all with small seating capacity and five-cent houses.”

The Iris declined in popularity in the early 1920s with the arrival of newer theaters. Although it was listed in the FDY as late as 1926, the Denver City Directory listed its address as the location of the Mars Theatre from 1925 to 1928. The Mars Theatre was never listed in the FDY, and was probably not operated as a movie house.

The house reappears in the FDY in 1933 as the Gem Theatre, the name it retained for the remainder of its history. It was still in operation as an adult theater in the late 1960s, just before the Chicago Block was demolished.

A paper about the theaters at 1746 Curtis Street from 1890 to 1920, by Paul O'Mally, is available in PFD format from Academia.edu at this link, but you have to sign up for the web site if you want to download it.