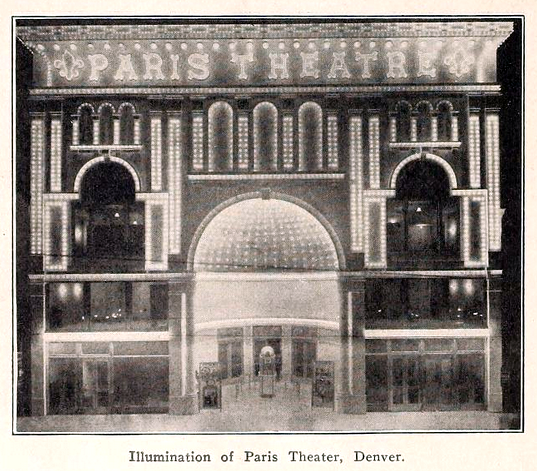 The Paris Theatre opened on October 5, 1912, almost exclusively for the showing of motion pictures. It later owned by the William Fox Corporation, it was one of the brightest among its neighbors, illuminated with over 2,000 exterior lights reflecting off its façade of white terra cotta. It had a seating capacity of 2,300.

Curtis Street was known then as Denver’s “Great White Way” for its many theatres, from 15th Street north to 19th Street. It was also touted as the “best lit street in the nation” because of the thousands of electric lights that were emblazoned across the exteriors of these fanciful structures. Its name was changed from the Paris Theatre in 1918, when the theatre was acquired by the owners of the nearby Strand Theatre & Isis Theatre.

The Rivoli Theatre was closed in the mid-1930’s and the building was levelled in the 1940’s for a parking lot. The multi-story Qwest Building now occupies the site.

Here is a photo of the Rivoli Theater.
View link

A Wurlitzer theatre pipe organ, Opus 17, Style 6, was shipped to the Paris Theater on March 22 1913. The inaugeral concert was on June 1 1913. Additions and/or alterations were made on September 1 1913. Over the years some, or all of the organ was dispersed.

A photograph of the Paris Theater taken between 1915 and 1918:
View link

Look at the bottom photo and see how stud lights are set into the building that spell PARIS.
Look at top photo and see how it looks like they covered the PARIS with lots of bulbs which perhaps could make different letters, interesting!

About that Mighty WurliTzer Theater Pipe Organ Ken Roe mentioned above. It was a 3 Manual/13 Rank. In September 1913 the organ was added to and/or altered. Also WurliTizer, Opus 30, a 2 Manual, was shipped to this theater on September 1, 1913 (the same month?). That dosen’t make much sense. It does say “PARIS TH(Mason)” which usually means the theater has changed it’s name, but, I can find no Mason in Denver and don’t feel comfortable asking to have a Mason listed. It was not unusual for WurliTizer to take an old organ and rebuild it, but I’m not so sure that an organ installed in June would be rebuilt in September and why would a 3 Manual be made a 2 Manual? Anyone have any explanations? It is hard to reconstruct an accurate story from incomplete records from 95 years ago!

At any rate as far as I know nothing is known about what happened to these organs. If you know anything about these organs, please email us!

Brown & Megahan ran the Paris Theater and sold it to the Fox Film Corporation in September of 1919. Fox changed the name to Rivioli. In the 1930’s it’s name was again changed, this time to Tivoli.

“And now you know —– The Rest of the Story.” Paul Harvey

A 1957 article suggests that the former Paris Theatre’s former organ ended up at the Los Feliz Methodist Church in Hollywood.