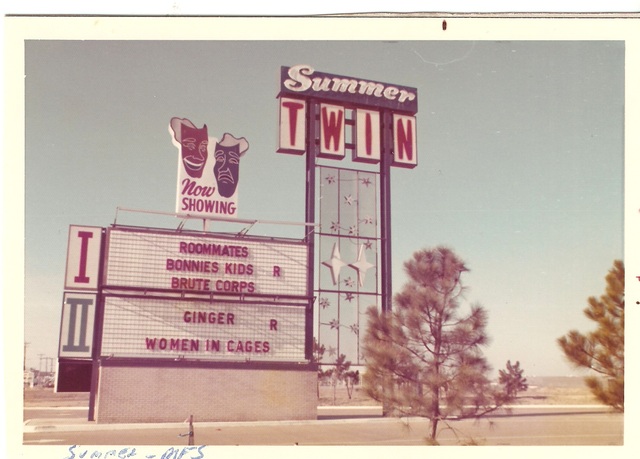 The Summer Twin Drive-In was opened by Malco Theatres Inc. on September 1, 1966, with a capacity for 1,600 cars. It replaced Malco Theatres earlier Summer Drive-In which has its own page on Cinema Treasures.

OK, the first one was located in the north-east corner of Summer and White Station. The second one is the current location. I assumed they were the same owner/company but from reading here, it looks like two different owners. On the southwest side of that intersection on Summer was a sign saying THAT was the city limits in 1953. The first Holiday Inn was just to the west, before Mendenhall. I can’t believe Holiday Inn didn’t keep it as a museum or something.

MOvies playing in 1977 at the Summer 1 “WINTERHAWK” and"WALKING TALL" another crazy booking at a Drive-in. Ever here of Theme night? on Summer 2 one can watch “COACH” and “LAS VEGAS LADY” with Stella Stevens,Wonder where these flicks are today?

mr wingo….the 51 drive in was actually north of town in millington. i had a really bad wreck pulling out of there when i was a teenager.

Both of the drive-ins in this neighborhood now have photos and pages of their own.

The Summer Drive-In is fully digital.

I remember my mom and dad taking us to go see THE KARATE KID II and TOP GUN in 1986. Good times..

I haven’t seen a car on to of a drive-in sign(possibly unique?)!!