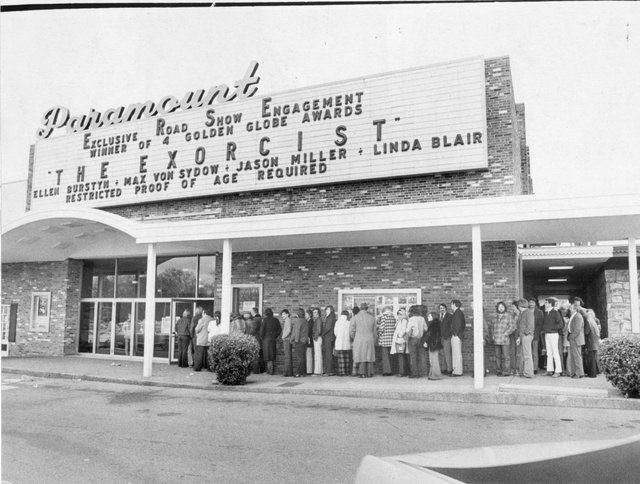 The opening of the Paramount Theatre in the Eastgate Shopping Center took place on November 19, 1964. The new ABC-Paramount showplace began as a single screen theatre with 858 seats in its gold-draped, curtain wall auditorium. Like most ABC theatres of the period, it was designed by architect Henry George Greene, who attended the opening. The widescreen, large format cinematography, 70mm Todd-AO, 6-track stereophonic sound, music filled soundtrack, presentation of “The Sound of Music” was shown as a reserved seat ‘roadshow’ engagement at this theatre. It started on April 7, 1965 and played for 79 weeks! That’s over a year and a half.

The theatre was later twinned and closed in 1990. No trace remains except a lone photograph.

How, starting in 1965, did a 79 week reserved-seat run work? How were seats reserved?

In 1965 it was known as a hard tiucket run. Tickets were printed on a light cardboard for each seat for each performance. You could buy your tickets in advance or at the box office for each performance. The box office had a print of the theatre seating and you could select yours seats if they were available. They also had mail orders for reserved seats at that time. You could choose your seats and give alternate locations. There were mail order forms, sometimes in the newspapers or you could pick them up at the theatre box office.

Actually, it was most likely The Park where I saw “Empire.” They had the exclusive 70mm showing there, and I saw it on opening day, first morning show, with FIVE people!! (Guess not a huge “Star Wars” base in Memphis…)

Yes, Empire was at the Park. The first run of Star Wars was at the Paramount, but the theater had been split into by that time. The line was stretched to the back of the building by the time I arrived. They’d not expected crowds of that sort. There wasn’t enough time for people to buy popcorn going in; consession workers were carrying boxes of popcorn up and down the aisle.

I saw the 1980 Popeye movie starring Robin Williams at this theater when I was 6. I also saw Empire Strikes Back at Park, had to sit in my Dad’s lap near the back row because no seats were available at the night viewing we went to. We must’ve went opening night.

A few of the comments refer to this theatre as the Park. When did the name change occur?

JAlex: I think the comments were just making reference to this Park Theatre on Park Avenue. The Paramount was always called the Paramount.

I was saying that I had the wrong theater, in regards to the “Empire” release. I realize that they are two different theaters.

@staylor066 I saw POPEYE too but I cannot remember the theater, I was all of like 4 or 5.

In what year did Malco take over ownership of this theater?