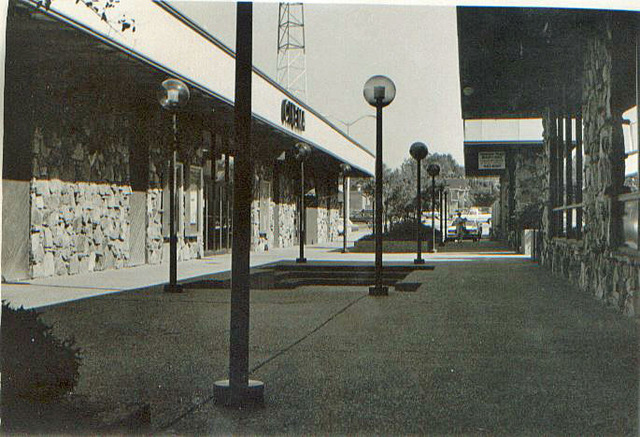 The Balmoral Cinema was built in 1975 as part of the new Balmoral Shopping Center at Quince Road & Ridgeway Road. It was opened on October 17, 1975 with John Wayne in “Rooster Cogburn”. It had a single screen, and was the furthest east of the neighbourhood theatres, and the last built with only one screen. According to reports it struggled the entire ten years of its operation because of its small size, location in the back of the shopping center lot and the times - despite being twinned and even trying some live music. It was located in an open courtyard; a large grocery building later sealed off the east end of the courtyard making the cinema even more difficult to find, despite a marquee facing onto Quince Road.

The Balmoral Cinema closed in 1985 (according to City Directory listings) and the building hosted a variety of tenants and uses. It was demolished in July 2017.

I went there a few times in the 1970s. One of our relief projectionists from the Guild ran it as an art theater for a while. It was a large strip-mall theater somewhat like the Paramount (described elsewhere on this site), but a little smaller and built later in the late 1960s/early 1970s suburban expansion. I saw several Laura Antonelli sex comedies, Romy Schneider and Rod Steiger in Claude Chabrol’s “Dirty Hands,” and most notably Klaus Kinski in Werner Herzog’s “Aguirre-the Wrath of God” there. My impression was that it struggled for its entire existence, probably due to the obscure location, not being on any well-travelled main drag, and not being very well known. There were two or three other mall theaters in other outlying suburbs that eventually suffered the same fate.

I grew up around this theatre in the ‘80s. I went to school at Ridgeway High School located directly behind the theatre. I remeber seeing second run movies there in the early to mid '80s: Raiders of the Lost Ark, The Cannonball Run, Etc. It closed shortly after that. A friend of mine actually invited me to go to church with him there! The last time I was in the building was in the late '80s when it had been turned into a hot tub and pool store. The store still had the theatre’s sloping floor. Not the best way to display a hot tub.

I saw a few second run movies there in the mid ‘80s. Horrified when I saw the hot tub store. I couldn’t bring myself to go in.

That place. Yes, I remember watching Star Trek:TMP in 1980. I had to wait til Blue Lagoon finished before it started. I guess they only had the 1 screen. Anyway, it was next door to a Seesel’s grocery store in a small strop mall. You had to walk down a corridor in the back to get there. It was kind of hidden. The photo lab listed at the address is probably inside the grocery store now called Schnucks(formerly a Seesel’s). The way it was remodeled you would never no that a movie theater even once existed there. But my memory of it still lives on!! Take that bulldozer and wrecking ball.

I saw “The Outlaw Josey Wales” there with some buddies. My dad took me to see “I Never Sang for My Father” there in the early 70s.

The small building that once housed the Balmoral is at the back of the complex running parallel to the street. The entrance was at the back of the courtyard and this retains the 6080 Quince street address. A faded sign for a store matching the description in one of the commentaries is over this entrance. All commercial now but a pleasant looking building for its era.

Well, the building has officially been demolished even as we speak. The only remnants of the place is on the South end which features the old Book Store, Baskin Robbins, and Little Caesars facing Ridgeway Bl.

I recall that when this theater opened, it was advertised as being the place “where your feet don’t stick to the floor” and that you got real butter on popcorn. I think it opened with Rooster Cogburn in possibly an exclusive first run. It did play other first runs like The Outlaw Josie Wales in tandem with with one or more other theaters. However, after a year or two it may have been having trouble competing with other chains as it was an independent.
It later played foreign films as an arthouse for a while. Then, it became a discount third-run venue for some years, allied, I think, with the Village Cinema at that point.