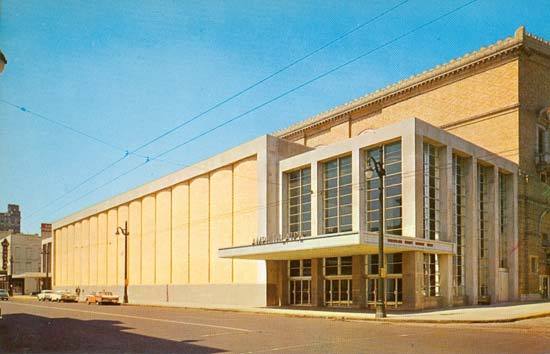 The Ellis Auditorium opened October, 1924, in the entire block of N. Main Street stretching from Poplar Street to Auction Street. The original name for the structure was “Memphis Auditorium and Market House”. It was a combination athletic arena, concert hall, convention center, and retail produce market. During the first ten years of operation, the rental income from the market stalls actually earned more money than the rental of the hall for entertainment purposes.

The Auditorium was built as a multi-purpose facility. It always had two separate theatre halls. From the 1925 brochure these were known as the Concert Hall (seating 2,500) and the North Hall (seating 6,500). Total 9,000 with a possible increase to 12,000. These other seats were between the two prosceniums (at Balcony level) and were clearly visible backstage throughout the life of the theatre though they hadn’t been used in decades. The stage was about two-thirds of the way down and originally had flying proscenium arches and a stage floor that could be lowered. Thus, the entire building could be one vast amphitheatre. The double page view in the 1925 brochure is looking from the North Hall across the stage into the South Hall with the arches raised and the stage floor raised to platform height. The asbestos safety curtain in the North Hall was called the Wonder Curtain, as it was soundproof as well as fireproof so both halls could be used simultaneously. Each side had a colored entrance and balcony; each side had a Kimball pipe organ. The North Hall was equipped with projection equipment and Al Jolson in “The Jazz Singer” was screened in 1929.

During its long career, windows were bricked up, chandeliers removed, neon cove lighting installed and the prosceniums made permanent. That did not prevent the stage floor from being lowered for circuses, ice shows and other arena events until the Mid-South Coliseum was built in 1963. The final remodeling included permanent theatre seating in the North Hall and the stage floor was fixed in the raised position.

The building was demolished in 1999 to make way for the Cannon Performing Arts Center which opened in 2003. That hall’s acoustics are exceptional and is the current home for the Memphis Symphony Orchestra as well as being available for rentals.

The 60s modern front shown in the color photo was also multi-purpose. The entrances, with escalators, were re-aligned to the corners of each hall (with marquees) and had a multi purpose large room between. It also made the building look modern from the street as was the case in several other downtown buildings. Existing photos of the WPA mural in the South Hall foyer (covered in this renovation) showed it to be of dubious artistic merit especially after a section of it was uncovered for fresh eyes to see it. It was covered again before the building was demolished.