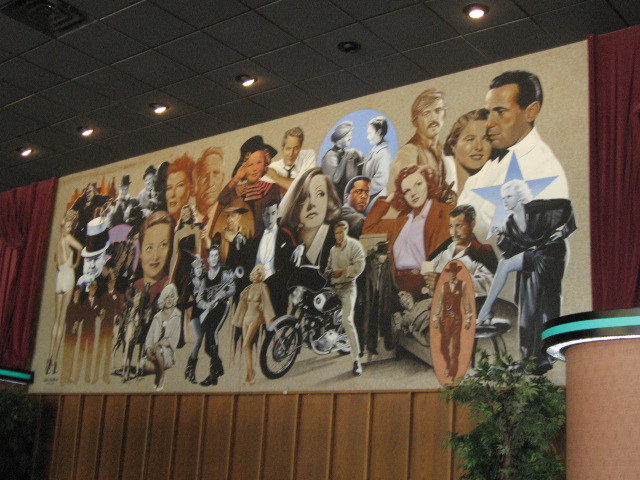 The Ridgeway Four was constructed in 1977, opening on June 17, 1977. It was a big deal when it opened because of the location and it was very elegant (at least at the time.)

It’s most prominent feature was a huge mural on the back wall of the lobby, large chandeliers and modern styling.

I remember seeing many movies there as a kid and well into my teens. I actually saw “Xanadu” there! I think I saw “The Empire Strikes Back” there as well. It’s still open but I hear mixed reviews about it these days. I no longer live in Memphis but I understand it is now a second run and art house theatre. By 2013, Malco had re-named it Ridgeway Cinema Grill.

I went there many times too, up until I left Memphis in 1983. Later when back on a visit took my wife, stepson, mother, AND mother-in-law to see Robert DeNiro in “Casino” there, thinking it would be a good movie about Las Vegas—then Joe Peschi started beating people with baseball bats, and I wanted to hide under the seat. Stepson seemed to enjoy it, though…

The mural behind the concession stand (mentioned above) was a collage of about 200 famous movie star portraits, everybody from Marilyn Monroe to the three stooges, and was a local talking point. Otherwise I agree with other reviewers that it was typical bland, uninspired Malco.

WHW, thank you. I had completely forgotten about the collage behind the concession stand. It realy was the only decorative element in any MALCO hall that I ever visited and it was WELL done.

I remember when the Ridgeway 4 opened and the mural was quite a hit. I saw many movies there, too. Always clean with comfortable seating. I liked those rows near the front.

People who remember the Hollywood Stars collage at the Ridgeway Four do not remember its predecessor which was the focal point of the Highland Quartet. It was removed many years ago the first time Malco tried to retire the cinema (U of M students kept it open for a while).

The present remodeling of the auditoria, one by one, is very up-to-date, stadium-style and with some nice light fixtures. It is more decorative than the upholstered shoeboxes with which it began. It is a hallmark of Malco’s continued fine presentation. The lobby, I believe, is next.

New photos have been uploaded of the remodeled theatre. A collage of famous Hollywood faces by House of Cruthirds is the focal point of the Ridgeway lobby and has been since its opening on June 17, 1977. It also inspired similar decoration in many later Malco theatre lobbies although this is the finest example. Many of the others were airbrushed.

Jimmie Tashie of Malco Theatres and the theatre manager on duty were very kind to me about taking these photos yesterday. The theatre is indeed very handsome, I would only want the older woodwork exposed and better light fixtures in the lobby. The theatre now caters to an adult—as in mature, want some substance to their movies—crowd. It is prospering and has become a “bistro” cinema serving wine and extra goodies. It is completely redone, converted to digital and I saw “Hugo,” “Marigold Hotel,” and “The Artist” there. The auditoria are remodeled almost out of recognition—for the better—except for the final demise of the curtains over the screen. The old square boxoffice has been removed and the outer foyer area furnished with bistro tables and chairs. Malco can now be really proud of it again as they were in 1977 when in opened. Was looking to see if there was any big spread in Boxoffice Magazine about the Highland Quartet when it opened. There was just a notice. The Ridgeway, I guess being the new home offices, was the one that got the glory. It also is free-standing where the Highland Quartet was in a four-sided…well they called it a mall in 1971…but everything faced outward with just an arcade around the outside. The Highland Quartet was a prime example of the “mimimalist” cinema style of the 70s—it didn’t even have any sort of eye-catching display, just a sign on Poplar Avenue and changeable letter boxes by the front entrance. Thank heaven things are different now.

An excerpt from the September 1977 issue of (City Of) Memphis Magazine reads: “It was Monday evening, August 15th, at the Graceland Mansion, and Elvis Presley’s aides had just informed him that they were unable to arrange a private screening of MacArthur, because a projectionist from the Ridgeway Theater, where the film was playing, would not be available at the late hour which Elvis had requested. It was the night before Elvis and his sizeable entourage were scheduled to leave for a 13-day national tour, and he was looking for a way to relieve some of the tension that normally preceded such departures.” Elvis died the next day.

Incidentally, one of the theaters selected for the opening night of the feature film “This Is Elvis” was Malco’s Ridgeway Four Theatre (Friday April 10, 1981). The film had premiered the week before at the Memphian.

I’m hoping someone can maybe help me confirm my foggy childhood memories. I believe I had my first movie going experiences at this theater. At least, I think it was either this, Poplar Plaza or the Quartet.

I’m fairly certain one of the first things I ever saw was PINOCCHIO and maybe several other Disney classics (SLEEPING BEAUTY and DUMBO, maybe) around say 1980 or 1981? I was all of 4-5 so it’s hard to say. I’m like 99% positive I also saw POPEYE (the Robert Altman film) around that same time too. I feel fairly certain that was at the Ridgeway. I think the Disney films were too because I remember thinking that the outside looked very “plain”.

Sure wish I could take a time machine and confirm my fuzzy memories… silly to wish to do such a thing but seeing these photos and discussing the past tends to bring out those types thoughts.

The Ridgeway Four opened Friday, June 17, 1977. The first features were: A Bridge Too Far, The Little Girl Who Lives Down the Lane, The Other Side of Midnight, and Walking Tall: Final Chapter. I’ll never forget this theater as long as I live. I saw the last showing of Captain Corelli’s Mandolin on 9/10/2001. The next day the world seemed to change forever. I still carry my ticket stub from that night in my wallet as a reminder.