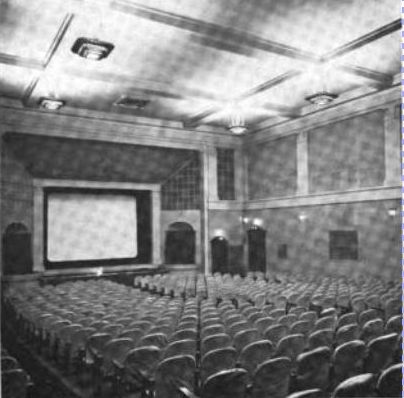 The De Luxe Theatre was built in 1912 – one of the earliest theatres in the once-fashionable Uptown neighborhood built specifically for motion pictures.

The De Luxe Theatre was built for the Gumbiner Brothers circuit and featured organist Fred Sosman on its large pipe organ, who had previously been the organist at the Auditorium Theatre on Michigan Avenue. It is said that Gloria Swanson, a Chicago-native, frequented the De Luxe Theatre when she lived in Uptown and made her earliest films at the nearby Essannay Studios.

One early visitor to the theatre remarked that “if the place fails at the pictures, it could readily be turned into a church”. For the first couple decades of its existence, it was one of the most popular movie houses in Uptown, until the opening of larger, much more extravagant palaces like the Uptown Theatre and Riviera Theatre which made the De Luxe Theatre as less desirable venue for movie-goers.

In 1938, the De Luxe Theatre was remodeled in a Streamline Moderne style to the plans of architect Mark D. Kalischer. It remained in operation into the 1960’s, though by then, the Uptown neighborhood had a dicey reputation. The De Luxe Theatre was demolished in 1972 and the site became part of Truman College.

I appreciate your effort to bring attention back to discussing the theater itself. I meant no harm, and apologize. Some of your questions were addressed in Feb. 2008.

I do remember the four lines on the side of the marquee as I would read them as I walked east on Wilson to go to work. I recall the many glass posters and the ticket taker about 10' inside. That made me think that the front 10 feet might have been open to the street earlier, and that maybe there was extra insulation back along the walls. I always noted how silent it was inside from street noise until one came close to exiting the front doors. I thought you had “north” and “south” reversed. I would have walked north into the theater, the concession stand, as I recall, was on the left, but I may be wrong about that. I know one zigged to the left and the corridor became more narrow. I recall the chandeliers. It was surprisingly elegant for the street in the early ‘60s.

I recall seeing a number of competitive westerns there in the early ‘60s which surprised me. But that was covered in discussion above. I also remember the two levels of “L” tracks simply because when I worked downtown after high school and came home on the “L,” Wilson was my stop. This was my commercial neighborhood and I was just sharing for that time period. I was always hoping people might remember more about it from earlier decades, but we do the best we can. The persons who worked in the DeLuxe were also rather nice; it was not a rowdy theater either when I attended.

It was just triggering memories; and I will try to restrain on these posts in the future.

At the THEATRE HISTORICAL SOCIETY in Elmhurst,IL., you can see 5 really nice pics of the DeLuxe- circa 1954. A small but nice pic of the marquee: JOHN PAYNE in PASSAGE WEST & ANN SHERIDAN in(the 4th line of the marquee is mostly covered by a street lamp). Three nice shots of the lobby- one showing the concession stand, the entrance to the auditorium, the entrance to the mens washroom(above it a large banner for the film GARDEN OF EVIL), and , to the far left, what looks like a staircase leading to the balcony. Behind the candy counter is another poster: THE LAST OUTPOST. Whoever took the picture was facing southwest. Another shot of the lobby shows the exit doors-6 total- and the ticket takers stand. Above the exit doors, two posters are featured, in between a sign stating SUNDAY MONDAY TUESDAY. Above that, a square clock. Looks like the picture was taken at 4:30. The camera was facing north. One more shot of the lobby features murals and another poster case (THE UNTAMED BREED is on display). This is the east wall ; beyond it the CTA L tracks and Broadway). The last shot is of the foyer lounge, with what looks like love seats. Pretty much the way I remember the place, although when I attended, a bit less decorative. But still, VERY impressive for a neighborhood theatre.

My nuclear family, father, mother, two older brothers and 3 older sisters moved from Alabama to join other aunts and uncles in the Uptown area in the early 60s until late 67. My 2 older brothers married sisters from West VA. My sister, just older than I were very young and attended the De Luxe regularly, usually at midweek and the Uptown on weekends. I recall seeing many horror movies such as Creature from the Black Lagoon and alien movies. We lived around the corner at Montrose and Magnolia. I cannot add much more than what has been added except to say that the neighborhood was in decay the late 60s around the De Luxe with alcoholics on the Racine sidewalk drinking from paper bags and regular fights on Sunnyside and Racne involving “hillbillies” as we were referred. My father was usually one of those who were being arrested at one of the nearby bars. Around the back of the theatre, on Sunnyside, was two small stores- one was Pat’s but I can’t remember the other name. West of the De Luxe on Wilson and Magnolia was the A&P grocery where all the locals bought groceries. I think I remember buses on Montrose(along the side of Graceland cemetary)as being electric with cables.I now live in Orlando, Florida and have recently returned twice in 2008 and again 3 weeks ago. The neighborhood is really looking up with a large Target on Broadway and Sunnyside and the before-mentioned Starbuck’s On Wilson and Magnolia. The streets are filled with young students as well. The Mexican restaraunt next to the Uptown Theatre also serves good food. I really would like to see the Uptown refurbished to add to these changes. Sorry to stray from the De Luxe discussion so much. Does anyone remember the fire department opening the hydrants on Racine r the blizzard of 67?

A correction to earlier questions; The blizzard was actually the winter of 1966- my mother has pictures of magnolia street and the hydrants were opened in several locations around Uptown during the summers- neighborhood kids played in the spraying fountain of water. There is a picture of a “snippet” of the Deluxe online from the vantage point of the hotel across the street. Check the google map street level vantage point and you will notice the corner of the building on Clifton still has the same masonry stones as the hotel once did.

WOW, that 1938 pic sure is nice- and brings back memories! Only a few changes over 2-3 decades. When I started going to the De Luxe in 57-58 through the 60s,the poster cases were slightly different. Each one had 3 posters- at the top, a 28" by 22" poster, and from the middle of the case to the bottom, two- 14" by 36" posters(inserts). Also, at the time, the paint around the DE LUXE sign facing Wison Ave. (light green in color, as I recall),was peeling and faded. Still, pretty impressive for a non Balaban & Katz theatre. Thanks for sharing, Tinsel.

Thanks for posting these. I’ve never seen good photos of the Deluxe before. It looks like the original design was really a dog.

The 1938 Boxoffice article Tinseltoes linked to back on August 27 says that the architect for the streamline modern remodeling of the De Luxe Theatre was Mark D. Kalischer.