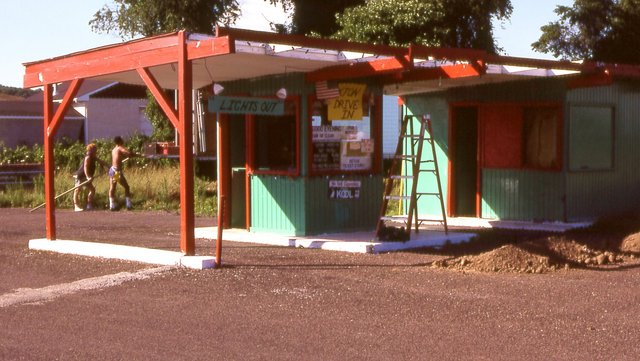 This was on Route 30 and Route 100 in Exton about 8 miles west of Paoli. It sat back off the hiway down a long entrance drive. It had a mobile home on the property which the manager lived in. This was one of the many Budco drive-ins in the Tri-State area and it opened July 11, 1956.

I grew up in Exton during the 1950s and 60s – and spent a lot of time at this place, both as one of four kids my parents used to take here for movies during the summer, and as a kid running around the property. I knew the family that lived at the Rt 30 end of the long driveway, the Gannons – and my other buddies Steve Ashbridge and Ted Rogers lived within spitting distance, too. Speaking of spitting, Steve and I climbed up the back of the screen one summer day when I was about 12 or 13, and had fun spitting over the edge, as 12 year old boys are wont to do. Until the manager saw us up there and hollered at us to come down. Got in a bit of trouble..not too much, just enough to chasten both of us.

I’m looking for one or two vintage pictures of the Exton Drive In for a vintage picture book of West Whiteland Township that I am working on. My deadline is fast approaching. Please contact me if you may be able to e-mail me a picture or two that I could use (high-resolution). I would give you contribution credit along under the caption. Thank You.

Many great memories of this Drive-In for me. I saw many movies here for the first time as a kid. One of my fondest memories was watching the movies from the backyard of my father’s rented apartment just behind the theater during long summer nights in Exton. I also saw George Romero’s classic Night of the Living Dead here in 1969, with my mother, and it scared me to death.

[Many years later I would direct Night of the Living Dead’s star ‘Judith O'Dea’ in my own horror film, ‘Abandoned Dead.’]

Truth is stranger than fiction.

Would love to find the original newspaper ads for Night of the Living Dead from the Summer of ‘69.

If anyone has any photos of the Exton Drive In please share here.

Mark C – you wont find any advertisements for Night of the Living Dead from the summer of 1969. NOLD was not released to theatres until October 1, 1969 with the premiere held in Pittsburg PA area where it was filmed.

The initial release of NOLD was very spotty due to its being handled by the Walter Reade Organizations’s Continental Films who really had no idea what they had on their hands nor what to do with it. Because I knew some people involved with the audio production on the film I went out of my way to see NOLD as soon as I could.

I first saw NOLD about two weeks before Halloween in October 1969 at the Embassy Theatre in downtown Reading PA on the bottom half of a double bill with ‘The Fiendish Ghouls’. Fiendish Ghouls was a re-cut and retitled version of the 1960 British film about grave robbers Burk and Hare called ‘Flesh and the Fiends’ and starred Peter Cushing.

Muviebuf – thanks for this reply – hopefully someone out there might have a movie ad for the Exton drive-in when NOLD played there – I remember it was very hot that evening if I recall so it must have been Summer. Maybe it was the Summer of 1970? The drive in was a perfect place for one of these kind of movies – especially with cornfields and old farmhouses nearby!

Sorry Marc. My bad. Memory fades as you get older.

Yes, I just checked it was 1968. I found an ad from the Philadelphia Inquirer.