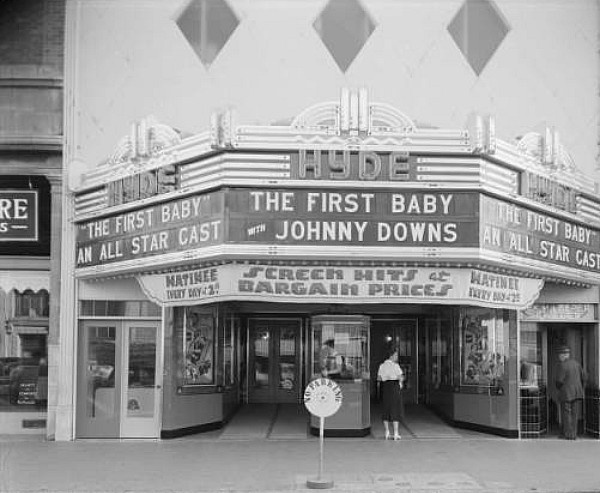 The Hyde Theatre opened on 20th March 1936 with Richard Arlen in “The Calling of Dan Matthews” & Charles Starrett in “The Mysterious Avenger. It was owned and operated by T & D Junior Theatrical Enterprises & Fox West Coast Theatres, who also owned the Visalia Fox Theatre. The Hyde Theatre was still open in 1956, but had closed by 1957.

KEN and anyone else,

Who were the principals of TDJTE? When did TDJTE get ownership of the Fox? Was it 1929 at VFT opening? Before 1936 opening of the Hyde? Was the Fox part of the spoils of Bankrupty of Mr. Fox? If so, when? Was R affiliated at all in this network? Who was the original owner of the ORIGINAL Fox (1914 -30) at Acequia and Court? Was there a subsequent owner? Can one safely say there were TWO Fox Theaters operational at the same time, at least for a few months (Dec, ‘29 – Feb 26, '30)?

Were all the prox 800 movie theaters under the FWCT banner all named Fox? Were there franchises or intermediaries between, for example, FWCT and TDJC, as either owners only, operators only, or owners – operators? Context above states a “chain” relationship is presently unknown. I tend to think there is some documentation out there somewhere available to some knowledgable soul who cares to elucidate.

I understand Visalia had yet another Movie Theater, the Grand, not named in this Cinema Treasures Review. Purportedly it was alive in 1939; I have no idea currently of it’s lifespan. I expect to receive info about the Grand within a week, but someone here may get a headstart on this issue.

RAGNAR: As near as I’ve been able to puzzle it out from the limited, scattered sources available to me, this is the relationship of the various theatre circuits which became Fox-West Coast: T&D was a San Francisco-based theatre circuit, owned by Fred Dahnken and William G. Turner. It began sometime early in the 20th century. There was some association with a circuit called Southwest Theaters, operated by C.L. Langley, who was also the managing director of T&D. Langley was also associated in some way with West Coast Theaters. In the 1920s, a partnership called West Coast-Langley operated theatres in Pasadena, among other places.

Eventually, all these companies were joined in a series of deals and mergers, under the West Coast Theaters banner, and by 1929, William Fox (who had opened his first nickelodeon in Brooklyn in 1904, and began producing movies in 1913 in order to have a reliable source of product to exhibit in his chain of theatres in the east) had acquired a controlling interest in the chain, which then became Fox-West Coast Theaters.

It was partly the debt Fox incurred in wiring several hundred theatres for sound that led to his bankruptcy in 1930. He then lost control of both the studio and the theatres, which in 1935 came under the control of Darryl Zanuck’s 20th Century Pictures.

I haven’t been able to discover the relationship of T&D Junior to Fox. Some theatres attributed to that company’s ownership were built quite a while after the merger of TD&L with Fox, and were operated by Fox-West Coast in later years.

The building which housed the Hyde still stands, and actually predates the theater, which was carved out of one of its storefronts (and likely a good deal of additional space). The commercial building itself has a brick and terra cotta English look to it with a slate gabled roof. When the Hyde was put into it, the portion of the facade over the theater entrance was given a Moderne fascia and a trapezoidal neon marquee. When the Hyde was gutted for office and retail, the Moderne fascia was replaced by a wood fascia of milled Victorian Revival shingles and moldings. I have heard that a few features, such as decorative painted surfaces, from the Hyde still survive inside the building. Around the rear are still to be seen a pair of auditorium exit doors.

Boxoffice of May 7, 1955, said that Al Bain’s Redwood Investment company had bought the Hyde Theatre building and planned to erect a new commercial or office building on the site. As the Hyde’s building is still there today Bain must have found it more economical to simply convert the existing structure.

Also, I’ve found a one-line reference to the Grand Theatre in Visalia, managed by Phil Harris, in Boxoffice of November 5, 1949. The Grand remains a mystery. 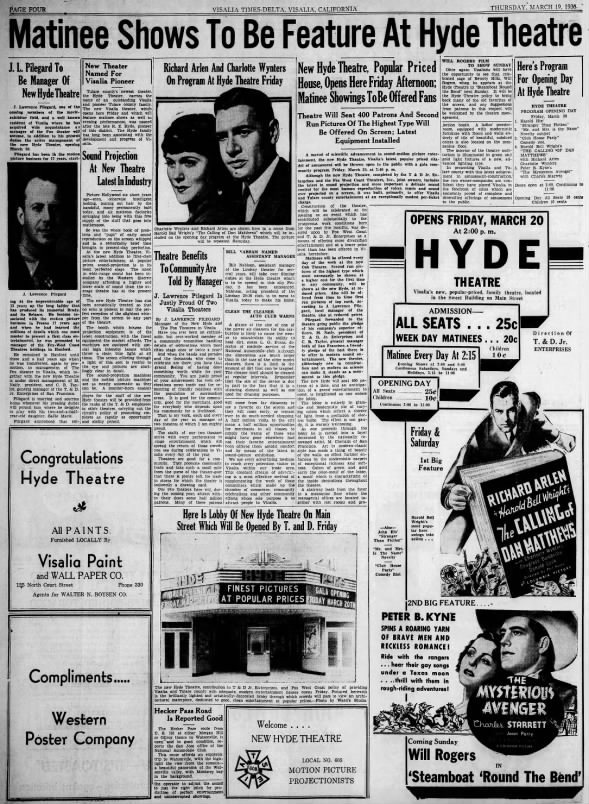