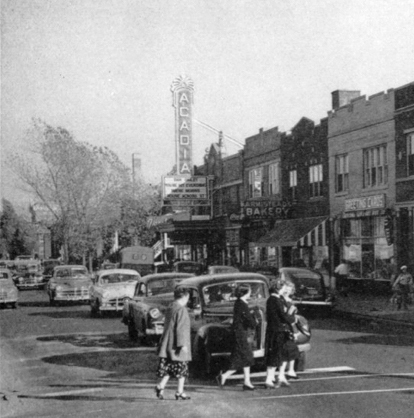 Located on the South Side of Chicago on W. 55th Street and S. California Avenue. The Acadia Theatre was opened in 1930 and closed in 1959.

The Acadia was in operation at least through May 1959. From the Chicago Sun Times, Sunday May 10, 1959: ACADIA 55th-California “INN OF THE SIXTH HAPPINESS” “SAD HORSE”.

The Acadia Theater was located on 55th Street between Fairfield Ave. and California Ave. 2739 W. sounds right. In 1947 I entered first grade at St. Clare of Montefalco School at 55th and Washtenaw, one block east of the Acadia. Today the Church is active but the school closed many years ago. From 1949 through 1954 I went to the Acadia Theater with my pals every Saturday. Movies told us about history, current events, good guys, bad guys, no guys (cartoons), and what itâ€™s like when a kid grows up. All movies were family movies. The Acadia showed recent films and ones made back to 1939. Films included Wizard of Oz, original Disney films, John Wayne films about the West and WWII, Casablanca, Shane, and Samson and Delilah. Many were about American heroes who did the right thing no matter what. They stimulated our imaginations and educated us. The Acadia, St. Clareâ€™s, and the Gage Park neighborhood were an incredible and unforgettable experience for a kid.

We had our choice of the Acadia, Colony, Marquette or HiWay theaters back then. During the 50’s, the Acadia featured “dish nite” during the week.

The Acadia was a social experience found nowhere else. In the early 50’s my pals and I enjoyed tearing empty popcorn boxes into pieces and launching them with rubber bands through the light beam from the film projector. When our projectiles went through the beam, they lit up like shooting stars. They also lit up the ushers. During Saturday matinees, which were never attended by anyone over thirteen, the ushers had to keep order. Since an ever-increasing number of shooting stars would eventually end in general chaos, the ushers did their best to find the culprits shooting them. If caught, the culprits were ejected from the theater, something I fortunately never had to suffer.

That is a bad neighborhood there now.

This is a great photo of a Red Cross parade heading West toward Midway Airport along 55th Street at the corner with S. California Ave. Judging by the Red Cross flag at the head of the parade and the autos, it looks to have been taken during World War II circa 1943-1944. The Acadia Theater is in the upper left near the corner of 55th and Fairfield. The building facing in upper right is on the SE corner of 55th and California. In 1947 I entered First Grade at St. Clare School at 55th and Washtenaw, another block to the rear (east) of the Acadia and on the other (north) side of 55th.

In my earliest remembrance, a Walgreen’s Drug store was on the SE corner of 55th and California. Armstead’s Bakery is shown on the SW corner. In my earliest remembrance, Gage Liquors had moved one door west to the SW corner and Armstead’s moved east to two doors west of the Acadia. Gertie’s Ice Cream Parlor was between the Acadia and Armstead’s. Just east of Armstead’s was Stanley’s Meat Market, followed by the Keyser Store (women’s and children’s clothing), and then Walgreen’s. I believe the tall chimney in the background behind the Acadia was part of Gage Park Elementary School.

In 1951 during the Korean War President Truman fired Gen. Douglas McArthur as head of UN troops in Korea. McArthur took a “victory lap” around the US to close his career. He was deeply revered by the American people for his military accomplishments in the Pacific during WW II and the Korean War. As part of his farewell tour he flew into Midway Airport and then drove East along 55th to Michigan Ave and then north to the Loop where a ticker-tape parade awaited him. 55th Street was lined with people 4 deep along his route, including the same intersection in the photo.

My grandfather built this theater and operated it until his death in 1947. It was sold, apparently operated until 1959 based on the comments prior, then the back (east) stage area was demolished and the building converted to three storefronts. The two one-bedroom apartments remained, as did much of the theater above the false ceilings of the stores. When Park Federal acquired the property in the early 90"s, my father, who was an usher in the 30’s and 40’s, went through the old ushers' dressing room. The projection room and balcony had been removed, but the vaulted ceiling and some decorative plaster work remained. I took pictures as it was demolished and have some old family photos of the building, ushers and the street. I will post them as I have the opportunity.

Grandpa also owned a theater at about 2426 W. 51st St. calle the Gaelic. That building is there as a tire store. I have not gone in there recently.

After this theater closed, the building was furthered used as a Polish banquet hall in the 1970’s and early 1980’s. New photograph added with the view of the old theater and marque from 1952.

1930 photo added to Photos Section, courtesy of Lindy’s Chili & Gertie’s Ice Cream, now located at 11009 S Kedzie Ave. Image captured by Billy Duffing. The film on the marquee has it’s own story too. Copy and paste to view link.