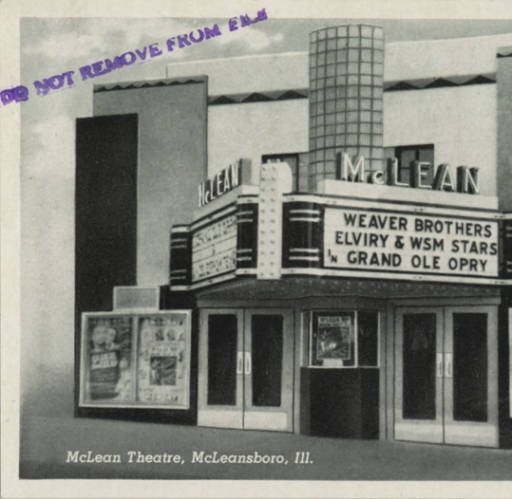 The McLean Theatre was opened in 1940, it was a designed in Streamline Moderne style. Closed in the 1970’s, it was last used as a teen safe house.

Any further information on the McLean Theatre would be appreciated.

A seating capacity of 500 is given in the 1950 edition of Film Daily Yearbook.

The last time I saw the McLean (maybe 2003 or so), all of the “fancy” seen on the ‘43 postcard was gone—marquee, Vitrolite, neon, etc.—and it was barely recognizable as a former movie theater. The interior was stripped down to the outer walls, and there were gaping holes in the roof. This one’s finished.

The McLean theater was re-opened in the 1980’s for a few years. I’m going to say 1982-1988 or thereabouts. It was my first job, working concessions in 1984. The manager at that time was Tracey Webb; after I left the job to go to college in the fall of 1985 I didn’t keep up with the place, but I think it stayed open another three years or so before Tracey closed it. After that it was a furniture showroom for a long time, and now I think the entire building is gone and the lot is a car dealership lot.