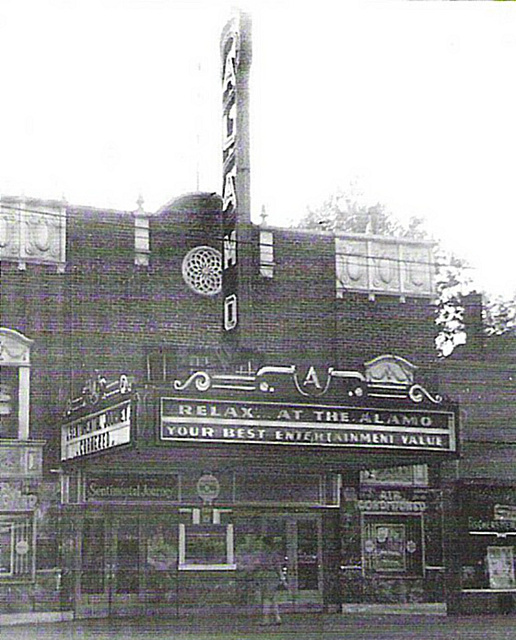 The Idle Hour Theatre opened in 1911 on 16th Street (today known as Cesar Chavez Drive) at Washington Street. The theater was later renamed the Alamo. After closing in 1954, the former movie house was converted to retail use, as it remains today.

The Film Daily Yearbook, 1950 gives a seating capacity of 588 for the Alamo Theatre.

In the early 1950s the owners of the Alamo also owned the nearby Mozart and the Pix(aka. Aragon, Avenue). The Alamo always had a policy of free dinerware to the ladies on Tuesday and Wednesday. The building still stands in one of Milwaukee’s most active business districts.

The Alamo had a blue glass tile front which was quite similar to the glass tile on the front of the Aragon. It had a large vertical sign above the marque with slashes between the letters in Alamo (A/L/A/M/O).

The Alamo was a corner movie theater. When American cities flourished, neighborhoods had corner grocery stores, corner drugstores, corner taverns, and occasionally corner movie theaters.
The Alamo was located on the northwest corner of South 16th Street and Washington Street(Cesar Chevez Dr.). Corner movie theaters were a business by themselves. The theater occupied the entire building. They were often small (500-750 seats)often independently operated and featured late-run or year-old films. Middle-of-the block theaters were often large theaters or movie palaces located in office buildings or apartment buildings with other street-level businesses. Middle-of-the block theater exits often opened onto back alleys or narrow gangways whereas the corner theater had exits on one side which opened directly on the side street. The Alamo’s entrance faced 16th Street and its emergency exits faced Wasington and an alley back of the theater.

About 5 years ago, this buiding changed hands from the electrical contractor office/warehouse it had been for years, and became a clothing store catering to this now heavily Hispanic neighborhood. The large enameled steel panels that had covered the facade were removed and in the process exposed the scars of the removed balconnets and bricked-up oculus that had adorned the blind second story main facade on 16th Street. Other panels now again cover the bruised brown brick work. The interior had apparently been a standard box beams and pilasters decor of the Photoplay Parlor era. The site never had parking of its own, but relied on the bus line that has always served that street which is at the end of a viaduct which had connected it to the downtown area across the wide Menomonee river valley to the north.

It looks like a plain brown box now. I would liked to have seen it about fifty years ago.

A Grand Barton Theater Pipe Organ 2/, manual/, keyboards/, was shipped 87 miles from the factory in Oshkosh B'kosh, Wisconsin to the Idle Hour Theatre in 1922. Anyone know what happened to the organ?