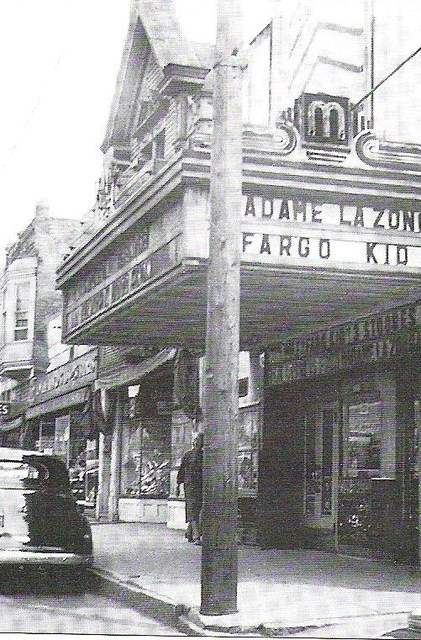 The Mozart located just south of Greenfield on 16th Street for years showed last run films with many B westerns. When it closed in the 50s it became a paint store. Recently some pentecostal church has bought the building and is putting a cathedral looking front on the old movie house.
50 years ago I saw a last run of the Wizard of Oz at the Mozart. I also saw THE RED BADGE OF COURAGE at the Mozart. The Mozart was one of the few Milwaukee theaters which showed that Audie Murphy classic.

The MOZART was not really any compliment to the famous composer of that name (though he was Polish and this was then a solidly Polish neighborhood), but its 30x120-foot brick building did seat 430 in some form of musical amusement in the early days of the silent films. When local architect Peter Christiansen was asked to design this modest cinema, he at least did put in mirrors and draperies of unknown design to help lift it above the nickelodeons which had preceded it. This did not please the building inspectors, for in their Inspection of 1912, they ordered them removed as possible hazards to the sudden egress of the audience in an emergency. This was standard policy at the time when memories of such as the Iroquois Theatre tragedy in Chicago were fresh in the minds of the safety minded, not that mirrors or draperies really figured in that catastrophe. The three aisles did lead to the seven by twenty foot stage platform, but it is not know if it had a proscenium wall, something often omitted in these early days when the screen was often simply adhered to the back wall. There was no air cooling in this modest structure, so this plus the flight to the suburbs after the second World War, caused the demise of this and many others of its ilk in those days of the dawn of Television.

Sorry about the mistake of mine in labeling Wolfgang Amadeus Mozart as Polish; he was, of course, German. I was thinking of the CHOPIN cinema also on the south side, and possibly I will write something about this little place which is now a plumbing store on S. 13th St.

This is a church called La Luz Del Mundo. I suggest that you check out the map view to see the bizarre remodel.

(Appleton Post-Crescent, March 22, 1926)
Frank Cook, manager of the Bijou theatre on Oneida-st for over two years, has disposed of his interest in the theatre to his partner, Robert Knoepe and will leave Tuesday afternoon for Milwaukee where he will take over the management of the New Mozart theatre at Eleventh-st and Greenfield-av. Mr. Cook will continue to buy pictures for the local playhouse and also will direct its advertising.

The New Mozart theatre has been remodeled into one of the most pretentious places on the south side of Milwaukee. Mr. Cook came to Appleton to take over the Bijou theatre two years ago last September.