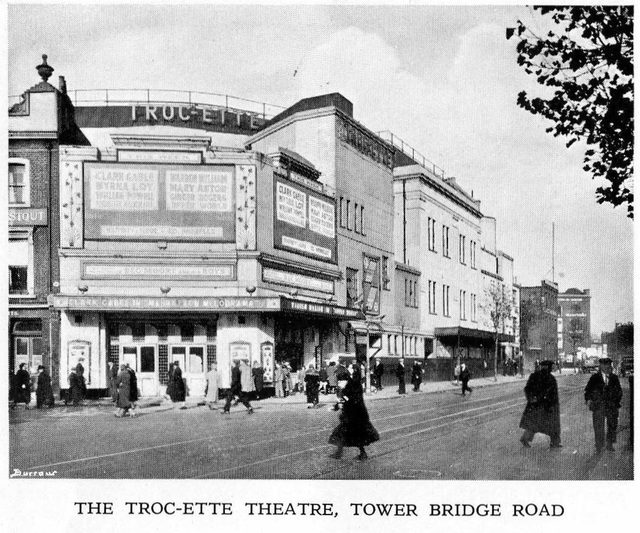 Located in the southeast London district of Bermondsey, this large inner suburban cinema, was located just south of the River Thames, near the famous Tower Bridge and next to the Horseshoe pub on the corner of Decima Street. It was was built for George Smart and opened in 1929 as the Super Cinema, complete with a Wurlitzer 2 Manual/8 Rank theatre organ which was opened by organist Arthur Jenkins. The proscenium was 25 feet wide, the stage 14 feet deep and there were five dressing rooms.

It was taken over by the Hyams and Gale circuit and closed on 1st February 1932 for minor alterations to be carried out by the original architect; George Coles, re-opening on 8th February 1932 with a seating capacity of 2,500.

In October 1935 the H&G Kinemas chain operated by Hyams and Gale were taken over by Gaumont British Super Cinemas who continued to operated the theatre. By 1937 it had been re-named Troc-Ette Cinema. It closed for a month in February 1941 due to war conditions, when Hitler’s bombers were pounding the London Docklands area to the East of the city.

In 1944, Gaumont Britsh Theatres took full control of the building, but it became an early casualty in the downturn in cinema-going when television started to become popular in the mid-1950’s and it closed on 7th January 1956 with Jack Hawkins starring in “Touch and Go” and Victor Mature starring in “Veils of Bagdad”.

After laying derelict for many years it was demolished in October-December 1975. The land first became a public space, but was eventually re-developed in 1989.

The Trocette formed a horseshoe round a public house, which was still in situ after the cinema was demolished. What amazed most people, to whom I spoke after the Trocette’s demolition, was how small the site appeared to be for such a large cinema – a tribute to the design skill of the architect, George Coles. This was the local cinema of Tommy Steele, one of Britain’s first pop stars and later a film and stage actor. It was featured in a television programme in the early 1970s, in which Tommy Steele reminisced about his childhood.