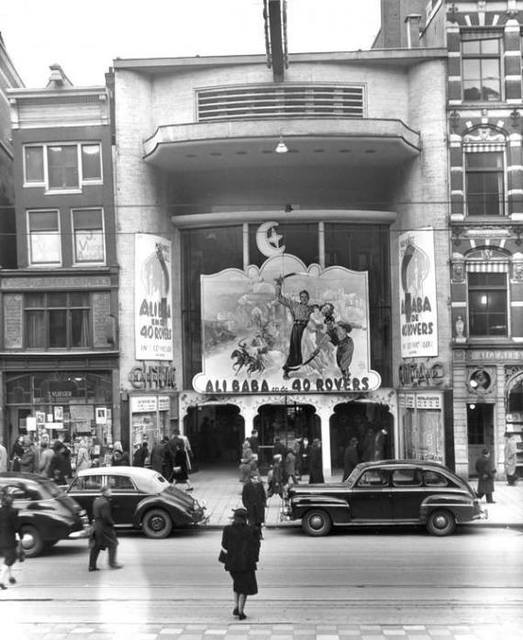 Located on the Damrak, the main street leading from Amsterdam Central Railway Station, the Witte Bioscoop opened here on 16th September 1911 in a converted room of a house.

It proved so successful that a new purpose-built cinema was built, designed by architect J.A. Straaten, it seated 600 and opened on 16th November 1912. It closed on 15th August 1929 as the Witte Bioscoop and re-opened three weeks later as the Capitol Theater. This was taken over by the Cineac Organisation who ran a chain of newsreel theatres and they closed it on 9th November 1937 and it was demolished.

The new Cineac Cinema on the Damrak opened 17th March 1938. The architect was H. van Vreeswijk who designed a 750 seat cinema that had 500 seats in the orchestra level and 250 in the balcony. The entrance was recessed from the street with a huge glazed window, shielded by a high canopy (marquee). Attached to this marquee was a blade sign, shaped like a bent arrow pointing at the building with the name ‘Cineac’ in neon letters. At the rear of the building facing the narrow, but main shopping street was a rather plain brick facade which had an entrance into the front orchestra stalls and there was a large blade sign that gave prominence to the building.

As Amsterdam already had another Cineac newsreel cinema, the Cineac Damrak location switched from showing newsreels to feature films in 1941. In 1974 the Cineac was converted into a twin cinema and on 23rd January 1975 Cineac 2 opened in the former balcony with a seating capacity of only 99. The Cineac closed on 6th July 1983 with Cineac-1 playing “Cyclone” starring Arthur Kennedy and Carrol Baker and in Cineac-2 a soft core sex film “Sexfestijn rond het ouderkerksplein” was the final attraction.

The building was converted into an amusement arcade with slot machines etc on the ground floor and a small casino in the former balcony. Nothing remains of the interior decoration, but the blade signs on both front and rear facades remained with the Cineac name, until 1994 when the word was replaced by ‘Casino’.