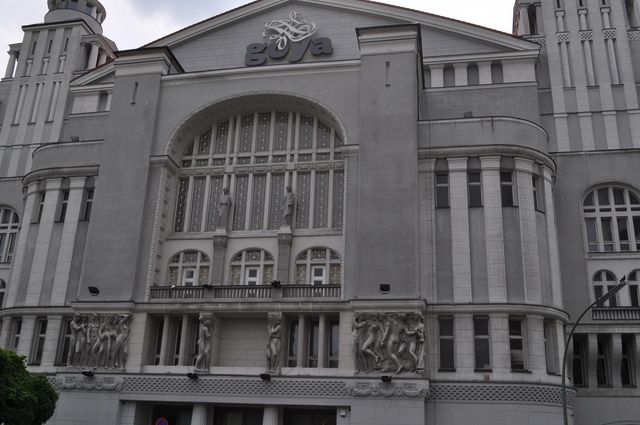 Originally opened on 25th October 1906 as a theatre and concert hall complex. The theatre section has now been demolished but the concert hall, known as the Mozartsaal and the main façade of the building still exists. The original architect was Alfred Frohlich and the Mozartsaal had a seating capacity of 1,438 seats set in an Art Nouveau styled auditorium that had seating on the main orchestra floor and a shallow balcony, that had side slips containing two rows of seating, which extended to the proscenium.

In 1911 it became a cinema known as the Lichtspiele Mozartsaal. The first German talkie film “The Girl With Matchsticks” was premiered here in 1925, but it was not a success. In 1926 the cinema was taken over by Ufa and the seating capacity reduced to 996.

It was modernised internally in 1930 to the designs of architect Georg Leschnitzer. The basic layout of the building changed by the removal of the second balcony and the original decor gave way to a Streamline Moderne/Art Deco style. Seating was 1,068 (711 in the orchestra, 357 balcony and slips). In 1942 it was known as the Nollendorf Palast and after the war from 1946-51 as the Neue Scala. From 1951 until it closed as cinema it was named the Metropol.

During the mid-1970’s it was used as a church for the evangelical ‘Jesus People’. In 1985 the building was extensively used as a location for the Italian horror film “Demons” directed by Lamberto Bava and produced by Dario Argento.

It then became a disco retaining the decor of the cinema and the name Metropol. It was one of the largest and most popular in the then West Berlin, catering to both gay and straight clubbers and continued in this use after the re-unification of Berlin.

Unfortunately, it was transformed into a 10-million Euro, very up-market nightclub named Goya, which opened on 1st December 2005 and closed three months later on 4th March 2006. Up-market nightclubs are not what Berlin wants! It had re-opened by 2007 as Metropol Berlin Nollendorfplatz.

This theatre is featured quite prominently in the film “Demons” (1985).

Looks like the former Metropol has been re-named ‘Goya’ as seen in this December 2005 photograph:
View link

Two more photo’s of the Metropol dating from 199