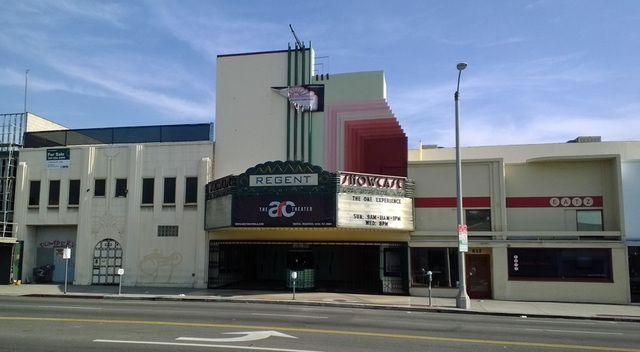 The Gordon Theater opened February 9, 1938 with Irene Dunne & Cary Grant in “The Awful Truth”. With its 899 seats, all on a single floor, it was designed by architect Clifford A. Balch for operator David Gordon. The murals on the auditorium walls were by interior designer Anthony Heinsbergen.

In 1985, it was renovated with the designs of architect David K. Mesbur, who won awards for his work on the theatre. Cineplex Odeon reopened it as the Showcase Cinema on October 11, 1985, with the movie “Colonal Redl”.

Sadly, the Regent Showcase Theater was closed on 29th May 2008 with the Yung Chang film “Up the Yangtze”. However, it soon re-opened and continued as an independent art house cinema until closing again in May 2009.

In 2013 it became part of the Artists Resource Center and was used as a church, renamed ARC Theater. The church moved out of the building in December 2015. By September 2016 another church was occupying the building.

Sacrilege! They should have this theater in operation!

The “for sale” sign, that has been posted on the building for a few months, now has a large “sold” notification attached. The sign lists the square footage of land; which raises some obvious concerns.

The listing now states that the Church has moved out of the building. What’s going on with it now?

Cineplex Odeon bought out many single-screen theatres in the 1980’s in Canada and named them Showcase.

CStefanic – I was past the theater this morning, and it’s being used by something called One Church International. At least nobody’s knocked it down, nor suggested it, as far as I know.

That’s good to know. I drive by it often – and the fact that it still stands is reassuring.

Judging by the age and art deco interior, I would “hope” this is a landmark that can’t be torn down. Then again, this is L.A. I used to go here off and on from 1969 – 1983. Classic old theater. Hope it becomes one again.

1956 photo as the Gordon Theater added via Mark MacDougal‎. The current Regent Showcase marquee appears to be the same, although updated. 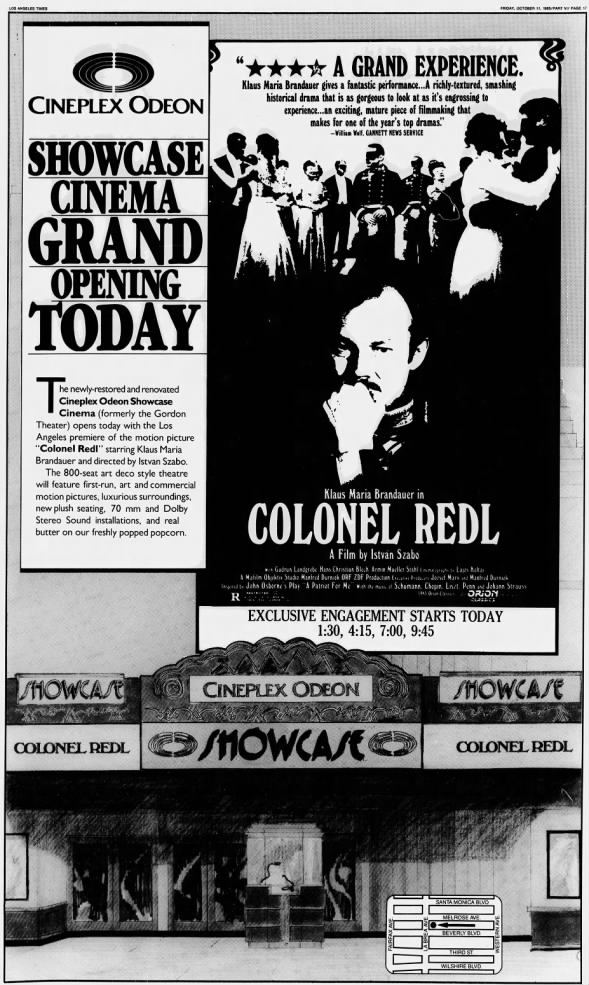 Other Showcase cinemas were built in Toronto and Calgary.