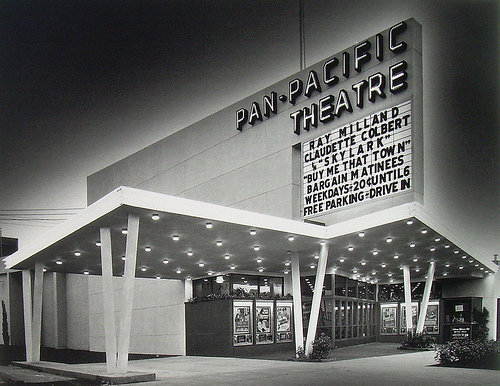 The Pan Pacific Theatre opened around 1937, and was located next to the famed Pan Pacific Auditorium which was destroyed by fire in the 1980’s.

The Pan Pacific Theatre was closed in 1984 and has since been demolished.

Contributed by B Erickson, Ed Haselwood
Get Movie Tickets & Showtimes

The Art Deco designation at top is the another result of the confusion between the theater and the auditorium. The auditorium I’d consider Streamline Moderne with some lingering Art Deco elements, so I’d say it would be best classified as Art Moderne. The theater, on the other hand, was a fairly pure Midcentury Modern design, although those split, angled columns certainly have a Googiesque quality. However, this theater was built before there ever was a Googie’s coffee shop.

Some of the moderne and modernist buildings designed for theaters were probably among the inspirations for what became the Googie style. What many theater architects did in their designs was to use the building exterior itself as an advertisement, which is essentially what John Lautner did when he come up with the first Googie’s coffee shop design in 1949. I see Googie not so much a style of its own as I do a modernist-influenced extension of the whole theatrical approach to architecture as something to pull in the customers, which was done even with the earliest big movie houses built in the 1910s.

And if form follows function, and one of the functions of a commercial building is to attract the attention of potential patrons, then I suppose Googieism can be seen as an expression, somewhat bent, of the first modernist credo, even though it’s not entirely within the modernist aesthetic.

I’d go so far as to say that placing as much or more emphasis on architectural effects to attract attention as on functionality of use is one of the primary distinctions between Moderne Modern, just as it was a major distinction between the somewhat eclectic classical revival theater designs of architects such as Thomas Lamb, and the purer classical revival designs of academic architects such as McKim, Mead, and White. It’s also one of the reasons why purist modern architects usually saw the moderne as an example of architectural backsliding, little better than the various revival styles, pure or not, that they wanted to displace.

But I’m sure architecture critics will be arguing about these distinctions for decades to come, so whatever descriptive terms eventually get adopted for these various styles are unlikely to be decided by me. I have fun blathering about it on the Internets, though.

Along those lines, the introduction is incorrect as it refers to the auditorium and not the theater.

The into definitely needs to be rewritten. It currently isn’t about the theater at all.

And while we’re at it, Modern or Mid-Century Modern (the latter more often referring to interior design, but increasingly used to describe buildings as well) should definitely be added to the choice of architectural styles available when submitting theaters to the site. The more issues of Boxoffice from the 1940s on I look at, full of photos of totally modern theater buildings, the more obvious it becomes to me that hundreds of theaters were built in purely modern styles. It doesn’t make sense to call them At Moderne, because most of them have left every trace of that style behind.

What we should call some of the recent multiplexes and megaplexes that borrow heavily from Art Deco and Art Modern, I don’t know. I guess Neo-Deco or Neo-Moderne might do, but I’ve come to think of them as Mannerist Moderne, since they usually have an exaggerated “referential” quality to their designs, characteristic of Mannerism.
But I don’t think any architecture critic has used that appellation.

In the 1970s, the late critic C. Ray Smith wrote a book called “Supermannerism,” which was mostly about architect Paul Rudolph, but the term appears never to have stuck as a stylistic appellation. I think he was on the right track, though. The works of more recent celebrity architects such as Michael Graves look Mannerist as hell to me.

This theatre’s main introduction above, has now been amended.

Does anyone have any interior phots of this theatre? I once worked there as a relief projectionist showing Monty Python and the Holy Grail. I remember getting a light shock anytime I would touch both projectiors at the same time.

we are fan’s of this great building

I remember going to the Pan Pacific Auditorium as a child for events like Ringling Bros Circus, Auto Shows, Sportman’s Show etc. The movie theatre I did not go to until before it closed. They showed 2nd run double features at a cheap, cheap price.

@Matt Spero: I was the regulat projectionist at the Pan for about two years before it went non-union. The shock you received was because the rectifiers they installed to replace the generator shared the same ground…whenever one or both rectifiers were on, you got shocked unless you opened the old table switch and broke the circuit. I have no photos of the interior, but I do have some old polaroids of the booth after it was automated.

The opening year for the Pan Pacific Theatre was probably either 1936 or 1937, as the entry for architect Welton Beckett (William Pereira’s partner) in the AIA’s 1956 American Architects Directory lists the design as a 1936 project.

Comparing some of the earlier and later pictures of the theater it’s a little surprising how much more dramatic it looks with a wider sidewalk in front of it. I presume the street was widened after the theater was built.