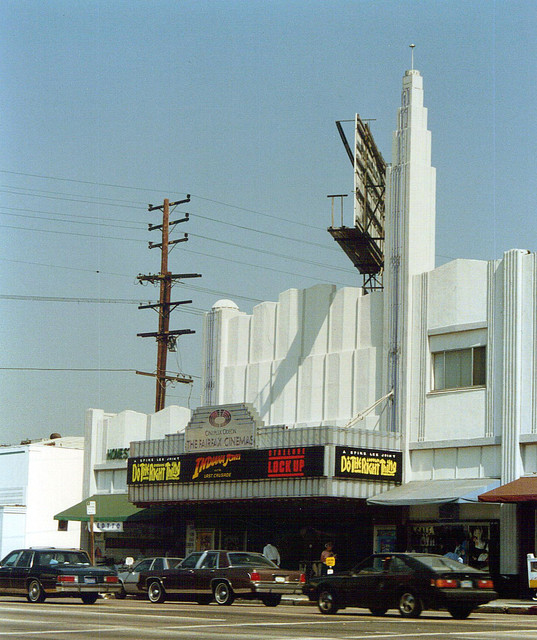 The Fairfax Theatre was opened on March 26, 1930, and was a 1,504 seat single screen with all seats on a single floor. It was designed for movies and vaudeville. By June 1938 it was operated by Fox West Coast Theatres.

It was converted into a 3-screen theatre on December 25, 1981. The two smaller auditoriums were carved from the original auditorium’s rear, leaving the original screen, proscenium and organ grilles intact within the largest auditorium. It was taken over by Cineplex Odeon in April 1985 and was closed for a remodel, reopening on May 23, 1986, when they operated it as a discount house. Laemmle Theatres purchased and reopened it on November 2, 2001 after an interior makeover with new seats and new carpet were added. Extra wide seating was also added which reduced the cinema’s capacity to one screen with 499 seats and two others with 192 and 222 seats.

Laemmle, which has always attempted to preserve the original historic elements of its acquisitions, retained the theatre’s free-standing ticket window. The ticket booth is one of the last in the West Hollywood/Hollywood area. They also retained the Art Deco style stencilled ceiling in the large auditorium.

When Laemmle took over the Fairfax Theatre, the programming was changed to incorporate mostly art house and foreign films.

The Fairfax Theatre was closed by Laemmle Theatres in September 2006. However it was taken over by Regency Theatres and operated as a second run art house. It was closed in late-February 2010, just short of its 80th birthday. In 2013, a City committee approved plans for a 71 apartment complex to be built, preserving the theatre’s façade, marquee and terrazzo floor at the entry, but resulting in the loss of the rest of the theatre.

On December 7, 2021 the Los Angeles City Council voted to make the Fairfax Theatre a Historical-Cultural Monument.

Does anybody know the status of this site? How can we have it registered as a historical landmark?

About the only movement/change I’ve noted over the past eight years is that they finally secured the theatre a year or so ago. For many years the boarded up entry had a large gap along the top which allowed birds to fly in/out, garbage to be thrown over, and potentially people to climb in. I also used to see some of the rear exit doors propped open from time to time. Fortunately, they closed off the entry gap and I haven’t noticed any open doors in quite some time.

Between the long leaking roof, years of bird/vermin/homeless access, and general neglect, I would hate to even imagine the shape the interior is in. I also seem to recall that they demoed much of the lobby shortly after closing.

Please update, theatre was taken over by Cineplex Odeon on May 23, 1986, grand opening ad posted. Cineplex Odeon took over operation of the Fairfax in April 1985 and shut it down after a short time and did a complete remodel with a May 1986 reopening.

The building which housed the Fairfax is being vacated of its retail tenants, which leads one to wonder if the long-planned redevelopment into apartments is coming near.