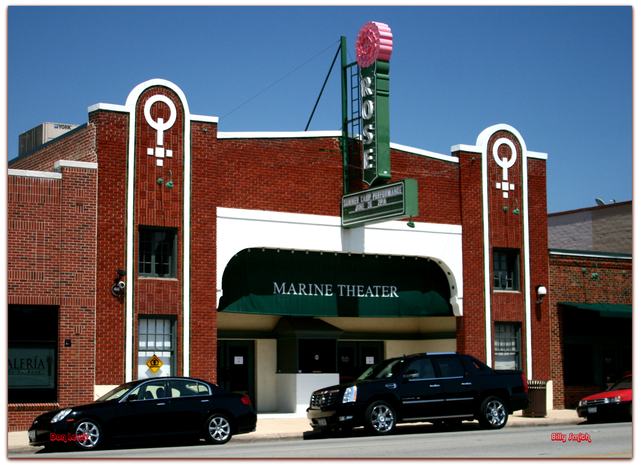 A unique and recently restored theater built as a 500 seat movie theater in the 1920’s. It is now dedicated to showcasing Latin performing arts.

It has a great, colorful vertical green sign with white letters spelling out “Rose” and is topped by pink rose.

Latin Arts Association of Fort Worth, the organization that manages the Rose Marine Theater, is in production for a documentary to chronicle this remarkable theater. Click here: http://www.underthetower.com/Documentary.html
to view the trailer.

hello there, this is my first post so… Names Avi and I’m involved in the documentary of the theater and the main premiss is to document the stories of those that visited the theater when it was open. If anyone has any stories that they are willing to share on video about the rose please give me a buzz at my email at or call me at 214-718-8353

The official website of the documentary for the history of the Rose Marine Theater can be found at www.asenseofplace.tv It will debut on Saturday, Sept. 20 at 7:30 p.m. It will then go across the country to various film festivals. There is a community effort to get it shown on our local PBS station as well.

The documentary of the history of the Rose Marine Theater is now on sale at www.asenseofplace.tv This documentary has recently received a Telly Award, and was broadcast locally on PBS.

A 2009 view of the Rose Marine Theater here and here.

A 2009 view of the box office and the tile entrance indicating when the Rose Marine Theater was known as the Roseland Theater.

Artes de la Rosa, the non-profit that manages the space, has garnered several local and national awards and achievements including:

2006 Coming Up Taller Award Winner â€" This national award, given at the White House by the First Lady, is the nationâ€™s highest honor for after-school arts and humanities programming for youths.

2008 U.S. State Department Honor â€" The State Department brought in ten cultural managers from Africa, South America, and the Middle East to study with ten different American arts organizations. We hosted an arts manager from Amman, Jordan for a week at the Rose Marine Theater.

2008 Release of Telly Award Winning documentary “The Rose: A Sense of Place”. Directed by Logan Gilpin and Michael Rodriguez the film depicts the history of the Rose Marine Theater, and aired locally on PBS on May 4, 2009.

2008 Designated An American Masterpiece by the Texas Commission for the Arts and the National Endowment for the Arts.

2009 Selected to participate in the On Location Program by ArtsEdge.

From 1937, a rare photograph of the Rose Theater in Fort Worth.

Now Artes de La Rosa Cultural Center for the Arts and the website as of now is: http://www.artesdelarosa.org/