Downtown Cowtown at the Isis

Downtown Cowtown at the Isis (Official) 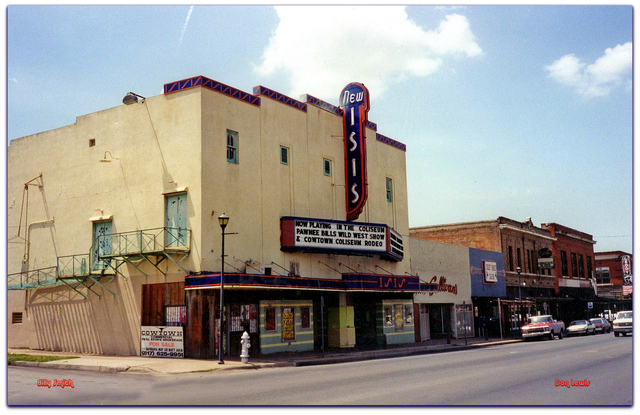 Opened as the 400-seat Isis Theatre on May 21, 1914, it was designed by architect Louis B. Weinman. Located in the Historic Stockyards district in Fort Worth, it was destroyed by a fire in 1935.

It was rebuilt and enlarged to the plans of architect W. Scott Dunne. With seating for 1,000, it reopened March 27, 1936 as the New Isis Theatre with Ginger Rogers in “In Person”. It closed in 1988 and was ‘For Sale’ for many years, becoming more derelict as time passed by.

A new owner purchased the building in spring of 2018 with plans to renovate & restore the building. Plans include screening western movies and educational projects in the daytime and present live performances in the evenings. It was reopened as the Downtown Cowtown at the Isis on May 28 2021.

Makes me sad every time I pass thru Cowtown. :(

You would think Fort Worth would try and improve Cowtown. as big of tourist draw, and the area looks so run down. Stabilizing IsIs would be a huge step toward that. If it was cleaned up and replaced the roof it likely wouldn’t look that bad.

I fear that the New Isis will go the way of the Major[Lido] and Crest theaters in Dallas. It has deteriorated well beyond “restoration”. Thanks, Chuck for the photo link.

Good news! The Isis Theatre has a new owner and plans for restoration are underway. We break ground in just a couple of weeks now. I am the marketing and sales specialist at the Historic Isis Theatre. We will be showing classic westerns/educational material/documentaries during the day, and at night we will be host to live entertainment (Music, Plays, Musicals, Cowboy Poetry ect) at a local, regional and national level. If you would like to see how to get involved email me at . We are very excited and hope to see you all there! Our instagram is @historicisistheatre and our facebook is Downtown Cowtown at the Isis Theatre. Check us out!

In the February 5, 1973, issue of New York Magazine, Texas novelist Larry McMurtry, author of The Last Picture Show, said that the New Isis was one of his favorite theaters. Boxoffice of February 26 (scan) cited the article and added additional information from a Fort Worth Press article (no date given) by Jack Gordon which said that the Isis Theatre had been operating at this address since 1913.

L. C. Tidball had built the Isis that year and, after rebuilding and enlarging the house in 1936, continued to operate it for many years thereafter. On Tidball’s death in 1966, his son Phillip inherited the house, selling it to Harold Griffith in 1970. Griffith was still operating the New Isis in 1973.

The elder Tidball had chosen the name from a list of theaters operating in New York City in 1913. He was looking for a name that had not yet been used by any theater in Fort Worth, and settled on Isis. L. C. Tidball is mentioned several times over the years in various trade journals. The April 10, 1937, issue of The Film Daily had this item:

“Fort Worth, Tex.— The New Isis, neighborhood theater on the North Side in Fort Worth, Tex., is installing a $12,000 air-cooling system for use this summer. L. C. Tidball operates this theater, which was completely remodeled a year ago.”

This web page with part of an article about the Isis Theatre says that the house opened on May 21, 1914, and was designed by architect Louis B. Weinman.

The subsequent page of the article reveals that the original Isis was a reverse theater, with the screen at the street end of the small auditorium and the projection booth at the rear, next to an alley. The building of the New Isis was occasioned by a fire which destroyed the original house in 1935.

The New Isis Theatre, with a footprint considerably larger than the original Isis, opened on March 27, 1936. The architect for the rebuilding is as yet unidentified.

I was just reading that this historical gem has been renovated and reopened. Here’s the article and the theatre website: https://fwtx.com/culture/downtow/ and www.downtowncowtown.com