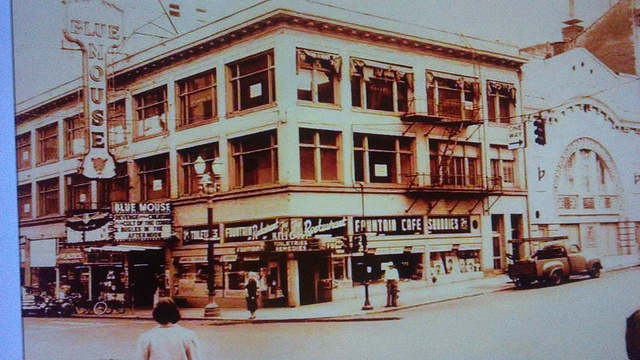 Opened as the Globe Theatre on September 12, 1912, it was completely re-modelled and re-opened on 28th November 1921 as the Blue Mouse Theatre. In 1926 it presented the first sound film to be screened in Portland; John Barrymoore in “Don Juan”. It was closed down for several years between around 1936 and 1940, re-opening in October 1940.

You can see a 1940 photo of the Blue Mouse (at it’s S.W. Tenth and Washington location) at View link

The Blue Mouse was kitty-corner (to the southwest) from the present-day Pittock Building.

If the Blue Mouse was not demolished until 1958, it had gotten a three-year reprieve. Boxoffice Magazine published an announcement in its September 10, 1955, issue that the theater was being razed to make way for a parking garage.

The Blue Mouse was on Washington at 11th, not 10th. A parking deck for the office building at 10th and Washington now sits on its site.

PSTOS has a couple of photos on this web page, though it also gives the wrong location of 10th and Washington. In the exterior photo, the ornate facade on 11th next to the three-story theater entrance building was actually the auditorium’s back wall. The doors are the auditorium’s exits.

Gary Lacher and Steve Stone’s book Theatres of Portland gives the correct location of the Blue Mouse, and has several photographs (Google Books preview.) The book gives the original opening date of the Globe as September 12, 1912.

A 1919 issue of a retail clothing industry trade journal called The Boys' Outfitter published a photo of the Globe Theatre’s auditorium with an audience of children attending a movie as guests of a local retail store.

Boxoffice ran a four-paragraph article on July 14, 1958 on the occasion of the Blue Mouse moving from its old location on 11th & Washington to the remodeled old Capitol Theatres at 4th & Morrison. It presented this timeline:

“The Blue Mouse, once a John Hamrick theatre, introduced the talking picture to Portland fans on Mar. 9, 1927, with a showing of "Don Juan,” starring John Barrymore. The program was identical to that presented in New York at the world premiere Aug. 6, 1926."