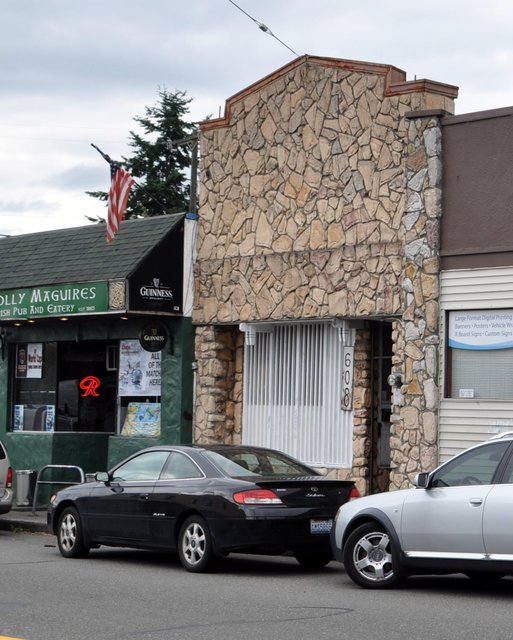 The Woodland Theatre was opened March 27, 1926. It had 750 seats. A Kimball theatre pipe organ had been installed in late-1925. It later became the Olympic Theatre

Compare the current building to the photo above:
http://tinyurl.com/5hd2ol

Check the address on Google maps. I think it’s the building to the right of the Molly Maguire Pub. It has the same cornice on its facade. Very little else resembles the original theatre.

crackdog is right. The distinctive cornice line of the theater is on the building at 608 NW 65th Street. The Woodland was not in the building Molly Maguire’s is in now, and where the confectionery was located in the 1932 photo, but in the building next door.

From the satellite view and from the Google street view along 6th Avenue NW, it’s clear that this narrow section of the building was only the entrance to the theater, and the auditorium was at right angles to it, with its rear exits on 6th Avenue. The auditorium is still there, and is probably used by Advanced Sign Design, Inc., which occupies all the storefronts from the former theater entrance to the corner.

In any case, whatever the address of the Woodland was in historic times, the former entrance is now clearly numbered 608 NW 65th Street, as can be seen in the Google street view.

The next mention of Walter Timm I can find is from 1957, by which time he was operating a theater in Portland, and there’s no mention of the Woodland. I’ve been unable to find any references to the house when it was the Olympic.

This entrance was so much nicer than the present rough stone one. Auditorium looks like it is still intact. Would be nice if someone would restore the whole theatre. A great location for a cinema I would think. Very high end area now. Close to Phinney Ridge Seattle.

I was in the Woodland about 20 years ago, the floor had been leveled and a dividing wall built splitting the auditorium into a front and back half. At the time I was inside, the back half was a print shop and used the original exit doors that would have been at the front of the house as their entrance. The back half and the former lobby area was in use as a home. The projection booth was a bedroom.

Vintage West Woodland provides this article about the Woodland Theatre. Among other things, it notes that the Kimball organ originally installed in the Woodland is now in the Everett Theatre in Everett, Washington.

The opening of the Woodland was noted in the April 10, 1926, issue of The Moving Picture World:

“H. W. Bruen opened his new Woodland Theatre on March 27 to capacity crowds. If anything, the house surpasses in beauty and good taste Mr. Bruen’s Ridgemont and Arabian Theatre.”

A followup item appeared in the issue of April 17:

“Bruen’s New Woodland Theatre at 65th and West Woodland was opened on March 27 and is a new link in the strong chain of suburban theatres of which Seattle is justly proud. The new Woodland, seating 750, has an unusually warm community spirit surrounding it; indeed, its members waited upon Mr. Bruen to interest him in building a house in their district.”

H. W. Bruen later moved to southern California, where he operated theaters in the Los Angeles suburb of Whittier for many years.

The nucleus of my second pipe organ was the Kimball from the Olympic Theatre.