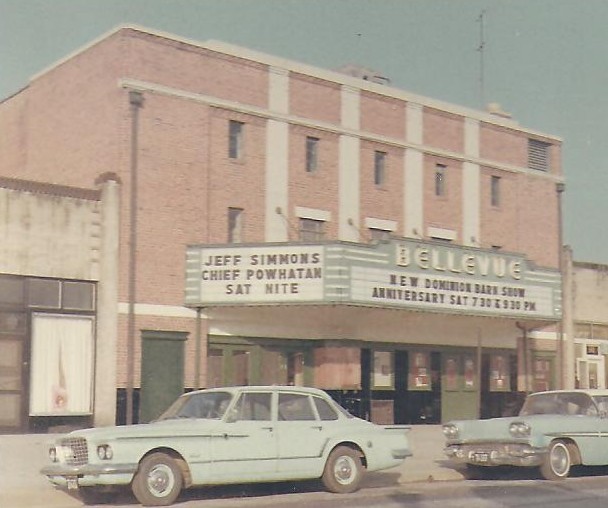 Opened September 1937 and closed in 1963. Warren Beatty and Shirley MacLaine lived nearby when they were children and attended this theater during the World War II years.

The Bellevue Theater is now used by the Shriners organization for meetings and dinners and is known as the Samis Grotto Temple.

For a picture of the Bellevue Theater go to View link

The picture was taken shortly after it opened in 1937.

The architect of the Bellevue was Henry Carl Messerschmidt, who also designed the Lee Theater, now called the Grace Street Theater.

The function should be restaurant, unless the theater is at 4028:

Some photos of the theater today, including interior photos, may be viewed at this site: http://retrorichmond.com/?p=55

The Bellvue was built in 1932, had a balcony, marble foyer and deco-pattenered borders.

The Lyric Theater had the Old Dominion Barn Dance a popular country music, “Grand Old Opry” type radio show in the 1940’s and 1950’s, till the Lyric was torn down. The Bellvue had the NEW Doninion Barn Dance hosted by WRVA from 1957 to the late 1960’s. The show had Johnny Cash, June Carter, Hank Williams and a young beardless Willie Nelson as guests.

RVA Studios now has a recording studio in the theater and along with Samis would like to restore the theater.

Anyone have photos, old and new, inside and out and more info?

Go to the Richmond Public Library and ask for the movie theatre file. It is full of pictures and has a great picture of the Bellvue auditorium and stage curtains.

If the theater was originally built in 1932, the 1937 project by Budina must have been alterations of some sort. My problem is that I made the comment identifying Messerschmidt as the architect in 2006, and I can’t find anything on the Internet that’s dated earlier and declares Messeschmidt to be the architect. That means the other sites posting more recently could have been using my 2006 comment as their source.

The other problem is that my new source, saying that Budina was the architect, is this document from Virginia Heritage, which has abstracts of building permit records for dozens of theater projects in Richmond, and the only record it gives for the Bellevue is the one from 1937. True, the list might not be exhaustive, but I’d be more comfortable if it had a 1932 permit for the Bellevue listed.

2016 article that claims 651 seats originally. Also has a Flickr link with interior photos.