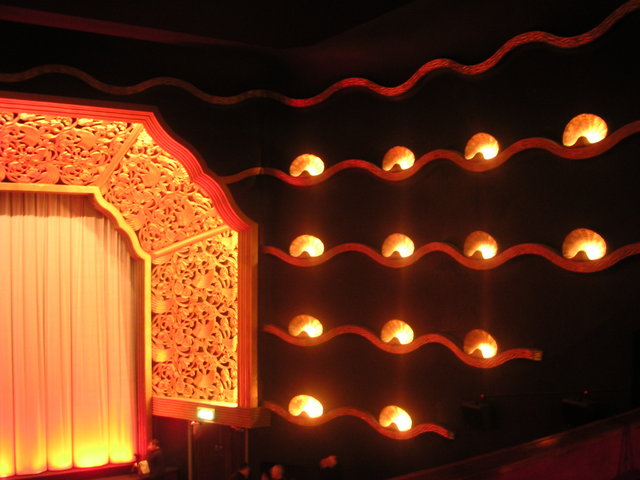 Located in Berkhamsted, Hertfordshire. A palatial cinema by famed cinema architect David Evelyn Nye for the Shipman and King circuit, the Rex Cinema opened in May 1938 with 1,100 seats in stalls and circle levels. A second Shipman & King property in the town was the Court Cinema, also an attractive cinema, which closed in 1960 and was converted into a Tesco Store which burned down 1969.

The Rex Cinema has a marine motif for the auditorium, the lights are concealed behind scallop shells in a lines of waves. This in a building just about as far inland as you can get in the UK! The proscenium arch is fantastically rich, a deep band of ornate plasterwork.

A tall foyer (now sub-let as a restaurant) contained a double staircase joining near the top to give entry to the rather squat circle lounge, nestled in the balcony void. Tall mirrors adorned the side walls.

Downstairs, passing under the joining of the staircase, there was a spacious café under the balcony, also richly ornamented, but causing a foreshortening of the stalls area with a result that there were more seats in the circle than in the stalls.

The projection booth was cantilevered out, high above the side road off the High Street.

The Rex Cinema, once my local cinema (and always one of my favourites), was renamed the Studio Cinema on 6th January 1973 when it was taken over by the Leeds based Star Cinemas chain and adapted for bingo (played on Thursday to Saturday) with films showing on Sunday to Wednesday. In 1976 Zetters (a bingo operator) took over and the final film to be screened in the original auditorium was James Cahn in “Rollerball” on 7th April 1976. The circle was disastrously partitioned off to form two small uncomfortable cinemas with one highly decorated wall and an off-set screen. They were named Rex 1 & 2 (seating 263 and 163), the front of the circle was extended forward toward the proscenium and the stalls area was painted a uniform cream colour and operated as a Zetters Bingo Club. The Rex Cinemas 1 & 2 opened on 11th April 1976 with Reinhard Glemnitz in “Sex in the Office” in Rex 1 and “The Bruce Lee Story” & “Somebody’s Stolen our Russian Spy” in Rex 2. The lease expired on 28th February 1988 and the cinema closed with Jack Nicholson in “The Witches of Eastwick” & Jason Bateman in “Teen Wolf Too”.

Fierce battles ensued when developers sought to demolish the building and build offices and flats on the site. The Cinema Theatre Association made efforts to save the building, and two days before it closed in was given a Grade II Listed status by English Heritage.

Over the next 16 years the building sank to a parlous state, unused, vandalised and under constant threat. There was a fire in the stage area in 1994. However this is one occasion that has a happy outcome as eventually the former car park and original flats were released for a new housing development, the foyer was partitioned off and let as a restaurant, but crucially the fabulous auditorium was de-tripled, restored and reopened as a cinema by James Hannaway.

It is once again possible to see a film in the original appearance of this wonderful cinema, albeit the front stalls have now been replaced by tables and the circle re-stepped, thus reducing the overall capacity considerably to 350. It reopened on 5th December 2004, and business has been reported as good, in addition it has been used for recording radio shows.

If you are ever in Berkhamsted, Hertfordshire, just north of London, make a point of watching a movie at the Grade II listed Rex Cinema, you won’t be disappointed!

The interior of the restaurant in original lobby is described here, with tiny photos:
View link

The photos linked in this report were taken in October 2008, many have a link in the text below the photo to an earlier 1988 picture taken from approximately the same spot.

I had the opportunity to tour the re-opened Rex last week and was astounded at the superb restoration that has taken place here. Necessity has required that some compromises have been made, the large car park to the rear of the cinema has been used for new build flats, which together with the former shops and original flats (which have an additional penthouse floor added), has funded the restoration. Also the original foyer and cafÃ© have been splendidly returned to â€œas-newâ€ condition, but no longer service the cinema, being an up-market bar and restaurant named â€œThe Gatsbyâ€.
http://www.flickr.com/photos/stagedoor/2955662123/
http://www.flickr.com/photos/stagedoor/2955662509/

However when you take a look in the auditorium you can forgive almost anything! This is undoubtedly one of the very few cinemas remaining in the UK where you can really watch a film in true 1930â€™s glamour, anyone who claims to prefer a multiplex having only ever experienced a run-down tripled movie palace should make a beeline to the Rex to see first hand the true delights of cinema.
http://www.flickr.com/photos/stagedoor/2956508010/

The cinema is now entered through, it has to said, a slightly awkward new set of doors, punched through the side wall at circle foyer level. The circle lounge was always the weakest part of the Rex â€" a long narrow squat corridor with toilets, storage and a managers office on one side and a pair of vomitory entrances to the auditorium on the other. You now enter at the former dead-end of the corridor and the space has been opened up to provide seating and a bar, following the underside of the balcony to give an impressive height. At the other end the ceiling has been raised but the ladies and gents have been retained and a box office constructed at where you would have originally come through from the main double height foyer.
http://www.flickr.com/photos/stagedoor/2955663041/
http://www.flickr.com/photos/stagedoor/2956507774/

Both vomitories are used and access to the cinema is now at circle level. In the balcony every other row of seats have been removed and the steppings built up to provide luxurious amounts of legroom â€" so much so that tip-up seats are not required and well upholstered fixed armchair seating replaces them.
http://www.flickr.com/photos/stagedoor/2955664219/

At the front sides of the balconies discrete new staircases have been constructed to give access to the former stalls area which now sports a bar with tables and individual chairs instead of the more usual rows of seats. The projection room is now accesses through the auditorium, in a rtaher small door, and the exterior iron stairs have been removed.
http://www.flickr.com/photos/stagedoor/2956507220/

No attempt to recreate the original colour scheme has been made â€" the cinema is now a dramatic mix of red, black and gold, which really highlights the amazing plasterwork and art deco features that remain just as David Evelyn Nye designed them back in 1937/8.
http://www.flickr.com/photos/stagedoor/2955663891/

The Rex was grade II listed in 1988, the year that it closed as the developers circled, eyeing the site for redevelopment. For once the authorities refused attempts to de-list and demolish the building, insisting that the auditorium remain as far as possible. For sixteen years this building lay unused, unheated, vandalised and branded an eyesore. The formula, so successful here, will not of course work everywhere, but the Rex Berkhamsted is a shining example of what CAN be achieved in the face of developers or pub chains who want to destroy the UKâ€™s cinema treasures for a quick profit.

It is gorgeous, isn’t it? Those dark walls just make everything pop.

What was the original color scheme in the auditorium—walls, draperies, etc.?

Sorry, I have not been able to locate any report of the opening which gives the colour scheme.

I did find a Hansard report from 1998 which the then MP asked the Minister to have the Rex de-listed and replaced by sheltered housing!
View link

The Minister for Film and Tourism (Mr. Tom Clarke)

I have no plans to visit the Rex cinema. If it were currently showing a good British film, I might be temptedâ€"but, as the hon. Gentleman knows, the Rex has been closed for years.

I am disappointed that the right hon. Gentleman will not visit the Rex cinema. As he has rightly said, it has been closed for some years. It is in a dilapidated state; Â£2 million is needed to glue it together. Berkhamsted is an attractive town and the Rex cinema, in the middle of it, is an eyesore.

As I said, Â£2 million is needed to repair the cinema. If it is used for cultural purposes, it will require Â£100,000 to Â£200,000 a year in subsidies. Will the Minister either provide the Â£2 million that is needed to bring the cinema back to its former glory and the Â£100,000 to Â£200,000 a year to maintain it or allow the frieze around the screen and the plaster shells on the sideâ€"which, as the Minister will know from his 1930s days are the sort of features that have given the Rex its listingâ€"to be stored elsewhere? Better still, will the Minister take steps to remove the listing, allow the site to be developed for sheltered housing and take the pressure off the green belt, which is so badly needed in Hertfordshire?

I have no intention of intervening. It is true that my Department has received letters, but only two have been opposed to the listing. One such letter was from the hon. Gentleman on 19 May 1997, in which he enclosed a letter from the developers. However, the local authority, the Friends of the Rex, the Ancient Monuments Society and the Cinema Theatre Association all support the listing. The hon. Gentleman will know that there is a presumption in favour of the preservation of listed buildings. We support that view.

The pictures of the restored theater are beautiful!! Simply gorgeous!! I’m glad the theater was saved.

No comments here since 2008? The current “Endeavor” TV show about young Inspector Morse takes place in Oxford in 1965. In the “Fugue” episode he is seen in a cinema auditorium. Where was it actually filmed? I photographed the scene on my TV & Ken Roe identified it as this auditorium.

Oops, it was the “Rocket” episode of “Endeavor”

One of the finest single screen cinemas in the world!