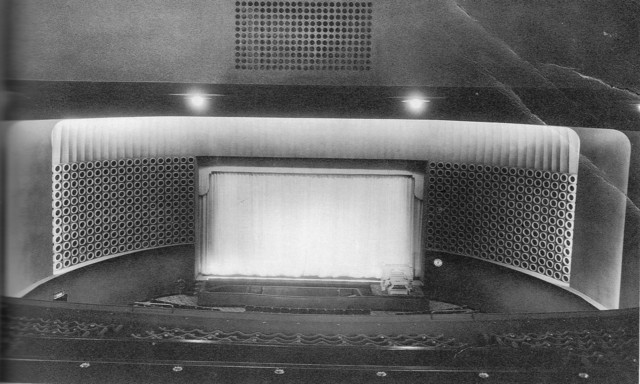 Located at 65-67 The Parade, on the High Street. Despite a very plain facade on the principal shopping street in Watford to the north of London, the Gaumont was a very fine cinema when it opened on 3rd May 1937 with Will Hay in “Good Morning Boys”, and Will Hay appearing ‘in person’, the main feature film was “Three Smart Girls” starring Binnie Barnes.

It was designed by architect J. Owen Bond for Lou Morris to be named Capitol Cinema, but was taken over by the Hyams Brothers (Gaumont Super Cinemas) in June 1936 prior to opening. It seated 1,388 in the stalls and 606 in the circle. Above the long entrance foyer was a restaurant.

The wide spacious auditorium had three steppings in the side walls and ceiling, containing concealed lighting, and culminating in a large honeycombe plaster effect either side of the screen. There was a Wurlitzer 3Manual/8Ranks organ installed, which was opened by organist Vincent Collier. The console was damaged in a fire on 13th December 1943, and it was rebuilt and re-opened in April 1944. However, the console was destroyed in another small fire at the screen end of the cinema on 30th December 1956. It was not replaced and the remains of the instrument were removed in 1960 and reused in the Methodist Church, Bigglewade.

The proscenium was 48ft wide and a small stage often had concerts by major pop stars and orchestras. There were three dressing rooms.

In 1963 the Odeon cinema further along The Parade closed. On 14th February 1964 the Gaumont hosted The Rolling Stones in concert. On 20th September 1964 the Gaumont took the Odeon name. It was tripled on 2nd June 1974 by the usual Odeon style of a drop wall under the balcony and two small cinemas (here seating 120 each) in the former rear stalls. These were fitted out to a higher standard than usual, the reason supposed to be that several directors of the Rank Organisation lived in the vicinity. The circle continued, apparently unaltered, using the original screen and containing 606 seats.

However, after a huge offer was made for the site (it was not actually up for sale at the time) the Odeon was closed on 15th October 1983 with Matthew Broderick in “War Games” in screen 1 (former circle) and Julie Christie in “Heat and Dust” & Ernest Borgnine in “Young Warriors” in the minis. It was demolished in November 1983 to provide the area with yet another large supermarket, this time a Sainsbury’s. It had been kept in very good condition throughout its life and as a still profitable cinema was an utter waste to close and demolish such a fine building.

Exterior photo of the Watford Gaumont / Odeon after closure here :–

Another photo, taken whilst the Odeon was still operating, here:–

Thanks Ian, great collection you have.

Hi, i used to work at this theater as a projetionist and was gutted when the news came that it was closing. Wished that i took some more pix now,but have added some pix of the projectors/box’s & closing down party here if anybody is interested.
Regards

I remember that the entrance block standing for months after the auditorium had been demolished, with the Odeon name still up – usually they try and strip off the names.

Does anyone know what happened to the hand prints of the stars that were at one time in the reception of the cinema in its Gaumont days?