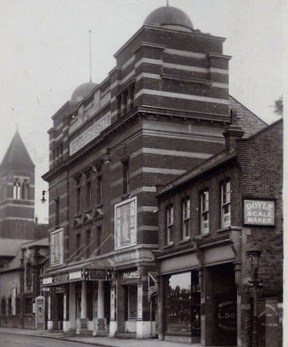 Located in Watford, Hertfordshire, today a district to the outer northwest of Greater London. The Palace Theatre of Varieties was opened on 14th December 1908 with a variety bill. Films were one of the acts in the programme. Seating was provided for 546, with 240 in the orchestra stalls, 132 in the pit stalls and 174 in the dress circle. The proscenium is 28 feet wide, and the stage 16 feet deep. There were three dressing rooms and three chorus rooms which could accommodate 20 artistes. Among the artistes who appeared at the Palace Theatre of Varieties were George Robey, Charlie Chaplin, Little Tich, the Seymour Hicks Company, Stan Laurel, Fred Karno’s Company, Marie Lloyd & Dan Leno Jr. In June & July 1910 it operated as a full time cinema and then went back to variety performances with a film presentation as part of the programme.

In 1911, the facade was completely reconstructed to what is seen today. A gallery with 250 seats was added above the dress circle, and a box was added at dress circle level on each side of the proscenium, which increased the seating capacity to 800. Films were dropped from the programme. Famous names who appeared in the 1920#s and 1930’s in clude Bob Hope, Gracie Fields, Anton Dolin, Wendy Toye and Ian Flemming.

In later years, it became a repertory theatre, and in recent years has hosted touring productions as well as producing its own shows. The Watford Film Society has a monthly screening of a classic films.

There are three pictures of theatre as it looks today on this webpage.

Some more photos of the Watford Palace here:–

INTERIOR FROM STAGE IN 2010

I would like to find out what was playing at the theatre on 11 May 1912 – Any suggestions about where to look would be gratefully accepted.