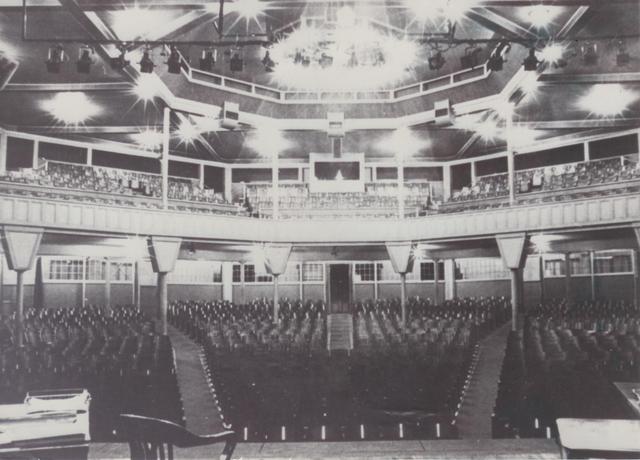 Located in Watford, Hertfordshire, in the north of Greater London, over the years the town had eleven cinemas. A conversion by architect Frederick Edward Jones of a former roller skating rink provided Watford with one of its longer lasting cinemas, opening 21 February 1921 as the Super Cinema.

The Super Cinema had most of its seats on the stalls floor, 1,108 with the remaining 120 in a small, rather awkward balcony. There was originally a Chinese theme to the decorations and an elaborate proscenium arch with a pit for the highly regarded orchestra.

Cecil Masey was called in for a redesign in 1930 and seating was reduced slightly to 1,121, a new Western Electric(WE) sound system was added.

The Rank Organisation acquired the lease in 1950 but continued to sub-let the cinema to an independent operator until 1963. On the closure of the Odeon (former Plaza Cinema), Rank decided to take control and have the Carlton Cinema as a second outlet to the soon to be renamed Gaumont to Odeon. 25,000 pounds was spent in modernising the cinema into an attractive single level (the balcony was hidden away) 778 seat cinema. The ceiling dome, a relic from the skating rink days, was restored and had 200 lights studded into the plaster as the main decorative feature of the auditorium. A new proscenium, a trapezium shape with the lower edge wider than the upper, was constructed, with a small platform stage in front to allow for use as a conference venue.

Rank declined to renew their lease in 1980, the Odeon (former Gaumont) having been tripled in 1974, and the Carlton Cinema closed on 19th July 1980 with “Zombies - Dawn of the Dead” and “The Great British Striptease”.

It became a furniture showroom for a short while but very soon acquired a shabby doomed look. It was no surprise then when the demolition team moved in during September 1982. An office block now stands on the site, which also contains a green room bar and cafe for the adjacent Palace Theatre.

A September 1963 photograph of the Carlton Cinema, about to re-open after modernisation:
View link

Another exterior photgraph from 1963:
View link

Another vintage shot of the Carlton and next door Palace Theatre here:–

I spent the day in Watford looking for the cinemas I visited every Saturday as a boy in the 1960’s. Wonderful to find these photos of the Carlton. I remember lining up to see The longest Day when it played there. What happened to the Essoldo, Odeon, etc?