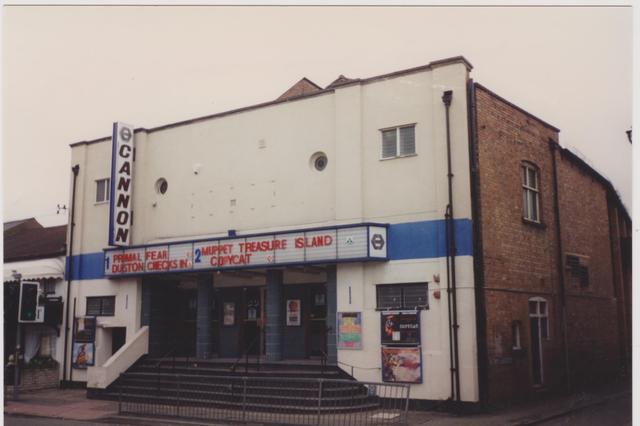 Opened in November 1913 and designed by the local firm of William Grace (Watford) Ltd., the Empire Cinema had a small foyer with entrance to the stalls and two staircases on either side leading to the balcony. There was barrel vaulted ceiling, with sparce Edwardian plasterwork in bands across it, and also on the balcony front. There was an orchestra pit but no stage.

It was updated and redecorated in 1930 when sound was installed and again in 1952.

However it was 1965 when the first major alterations were put in place. The facade was completely covered over apart from four windows at the upper level, two rectangular and two round. The auditorium was completely modernised with a new curtained proscenium arch in front of the original and tiled acoustic panels on the side and rear walls. Seating was reduced to 538, 142 of which were in the circle.

This cinema, just outside the town centre, was never in the front of the queue for new releases but existed very happily as a ‘family cinema’ screening popular repeats. I saw many of the big musical films of the 1970’s and 1980’s here. X-rated fare was very rare.

It’s independent status ceased in 1976 when the Empire Cinema was acquired by EMI (the parent company of Associated British Cinemas(ABC), and a more up to date release of films became available. It closed in 1980 for conversion to a two screen unit. This entailed gutting the original auditorium, extending the balcony forward, and rebuilding the projection room. Empire 1 (downstairs) now seated 356 whilst Empire 2 (upstairs) accommodated 195. It reopened on 21 August 1980.

It closed in the mid-1990’s after multiplexes arrived in town and was converted to a Muslim Community Centre, the facade has notably been restored to the original appearance. By 2019 the foyer was in use as a barbers' shop.

There’s a picture of the facade in Dennis F. Edwards “Watford A Pictorial History” Phillimore, 1992, illustration 125. This is from the author’s own collection. It would seem to have been taken soon after 1916, as the hoardings advertise Lady Tree (Maud Holt) in “Still Waters Run Deep” (1916) showing Next Week, and “Mr Lyndon at Liberty” London Film Company, from 1915 book by Victor Bridges, for the current week.

Photo of exterior from 1989 here

Another picture, after closure, during conversion to the community centre here:–

We believe it must have closed in 1996

Front and rear shots of the Empire in it’s Cannon days here:–

i worked at this cinema in the early 90`s i remember when we did a rocky horror picture show themed evening all of us that were staff dressed up and welcomed the visitors. as i rembember was told that george micheal worked there when he was about 14. i remember as well when eastenders over took the parking when they shot a couple of scenes in the road opposite they where the scenes where ian and cindy where going to the solicitors about their divorce,

As of February 2020 the foyer space is occupied by a barber shop, unclear what the rest of the building is.