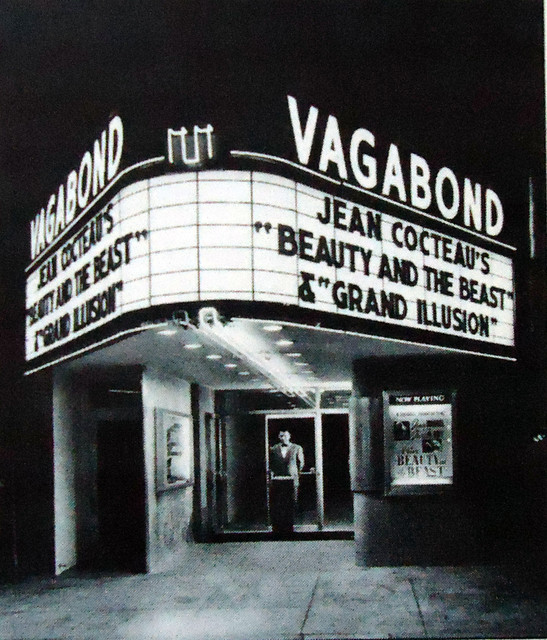 The Masque Theatre opened in 1926 as a legitimate theatre. It is located on Wilshire Boulevard, in the Wilshire area of Los Angeles. On May 26, 1950 it went over to movie theatre use reopening as the Vagabond Theatre. This was one of Los Angeles' great revival houses until the late-1980’s, when video almost killed the place. It hung on a few more years into the 1990’s, showing classic 3-D films such as “Kiss Me Kate” and “Dial M for Murder”.

The Vagabond Theatre closed in 1993 and was afterward used for some time as a church. The theatre can be seen in the 1988 film “The Naked Gun”.

Since early-2006, the former Vagabond Theatre has been hosting live theatre, and is now known as the Hayworth Theatre. It had three auditoriums, with seating for 99, 42, and 49. The Hayworth Theatre is home to the Circus Theatricals theatre company. A recording of the show “Naked Bois Singing” was filmed here. By 2017, the two auditoriums in the former balcony had been converted into office space. Seating in the main auditorium is 198. The projection booth is intact, but the projectors, speakers and movie screen have been removed.

(That last comment refers to a much more recent picture posted above, not the 1982/83 ones.)

What made theaters great such as the Vagabond and Tiffany was the efforts of their owner/operators to find and program unusual films. Tom Cooper was a master at this. He would pester the studios to let him play old 35mm nitrate prints that he had the projection booths specially converted to so they met the fire codes. When I was at Universal we were able to get him copies of the Howard Hughes RKO films, Scarface and Hell’s Angels. They opened to large crowds for a limited engagement in the 80’s.

What became of Tom Cooper?

Yes Tinseltoes, it was the same Tom (Tommy) Cooper who owned the Vagabond and the Tiffany in those years and had made that record album you wrote of.

“Was it named after Rita Hayworth?”

The introduction to this theater should note that the Masque Theatre opened as a legitimate house in 1926 and was converted to a cinema as the Vagabond in 1950.

Getting a comedy club on the first floor.

Screening movies again! On October 20th the Hayworth will be screening a 16mm film festival. Hopefully this breathes new cinematic life to the once grand house.

This opened on May 26th, 1950 as Vagabond. Grand opening ad posted.

This house appears in the new release Long Weekend.