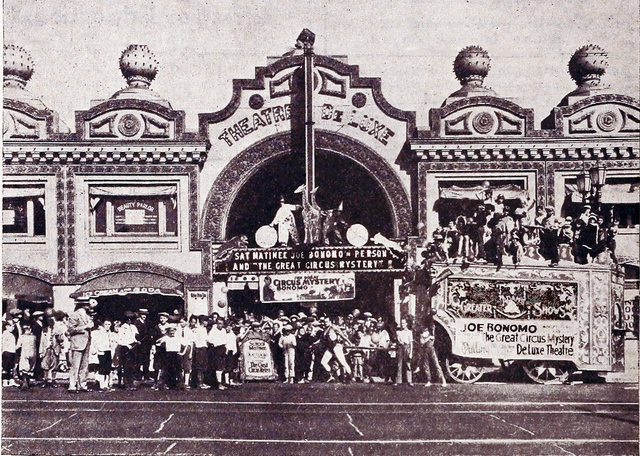 This silent-era house was in operation as the Theatre De Luxe in 1913. It was listed in city directories from 1923 through 1927 as the De Luxe Theater, but was gone from the listings by 1929.

The building in which the De Luxe Theatre was located, at the southeast corner of Alvarado Street and Wilshire Boulevard, was built in 1910, which might have been the year the theater opened. The theater was tucked into a two story “L” shaped structure, which can be seen at the very bottom of this 1956 aerial view, a bit right of center. The auditorium can be distinguished by its roof.

By the 1930s, the building housed a branch of the Thrifty Drug Company, which remained the main tenant for several decades. In 1970, the second floor of the “L” shaped section was removed, and the roof of the former auditorium was rebuilt along with the rest of the roof, at a lower level, so essentially nothing remains of the De Luxe Theatre but the walls.

Although the County Tax Assessor says that the building the De Luxe Theatre was in dates from 1910, no theater is listed at 656 S. Alvarado Street in the 1911 city directory. In fact, in 1911 there are no listings for 650, 552, or 656 S. Alvarado, and 654 is listed as the home of Jennie M. Emory. This makes me suspect that the building is not quite as old as the Assessor’s office believes it to be.

I now suspect that the Theatre De Luxe was located in the proposed building described in this item from the September 27, 1913, issue of The American Contractor:

Orange Street was then the name of that section of what is now Wilshire Boulevard running east from Alvarado Street. It was renamed after the street was cut through Westlake Park.